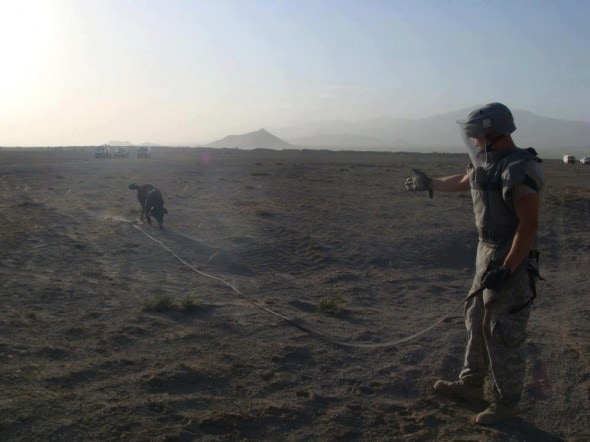 The story of June Etlinger and her mission to have military working dog Mina receive a proper soldier’s burial caught the attention of a lot of people last week. Oakland County’s director of public services Mike Zehnder was one of those people and he wanted to make sure Mina would get the formal military burial the black lab deserves.

Etlinger’s son, Corey McCourt, was Mina’s handler for three tours of duty. Mina in total served nine tours. When Mina was honorably discharged from the army he went to live out his retirement with McCourt’s family. Mina passed away recently and Etlinger thought it was only fitting that he receive a soldier’s burial. However, when she made the request to Great Lakes National Cemetery in Holly, Michigan she was told that canine burials were not permitted.

Zehnder was reading the paper Saturday morning when Mina’s story caught his attention. “Anything to do with veterans or dogs usually piques my interest,” said Zehnder. “The dog was a veteran and I’m a veteran. We should honor our vets as they should be honored.” Zehnder decided to do something about the situation and called Etlinger.

Zehnder offered to fund portions of Mina’s burial and to make sure Mina received the honors he earned. Etlinger returned his phone call in tears. On Tuesday a county truck with a uniformed officer picked up Mina’s body and the remains were cremated with an American flag. Zehnder is covering the costs. A burial with military service will take place at the War Dog Memorial Cemetery in South Lyon when McCourt returns home this spring. Zehnder will be paying for Mina’s headstone.

Etlinger is honored by the media coverage and the support they have received. In a statement she read from the McCourt family she said that the McCourts “would like to extend their heartfelt thanks to everyone working very hard to get Mina the honor that he deserves.”