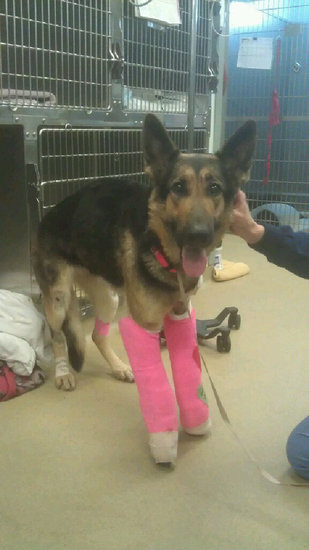 Earlier this week we brought you the story of Lindey, the German shepherd tossed from a bridge in Kansas City.  We are happy to report that Lindey is smiling again after she was able to undergo surgery thanks to a number of generous donors.

Spectators were at a horse show when they saw a dog fall over 40 feet from an overpass and land in a parking lot of the arena where the horse show was being held.  A snowbank broke her fall, but she was still very badly injured.

“When dogs fall that far they assume an orientation in space where front legs are coming down first, followed by their head,” said veterinarian Dr. Richard Smith. “We call that a 3-point landing and it’s not very pleasant; when front legs give out and then their chin hits the ground and causes damage to their mouth as well.”

Lindey’s front paws were badly damaged, and her teeth were knocked into her jaw.  She also suffered internal injuries.

“She had some blood in her stomach, some compression in her lungs,” Dr. Smith said.

He also said there was evidence of previous abuse, which is not surprising considering she was thrown from a bridge.

Costs for treatment and follow-up care were estimated to be about $10,000.  But Lindey’s sad story touched many hearts, and the donations poured in.

“We are so appreciative and grateful of those who share whatever they have to help this girl because she is a sweetheart,” Dr. Smith said.

Lindey, who was named after one of her rescuers, has a long road of recovery ahead before she is ready to be adopted.

Anyone with information on who may have done this is urged to contact the Kansas City Police Department.  Their website can be reached here:  http://www.kckpd.org/ContactUs

Anyone who wishes to donate to Lindey or other injured German shepherds may do so here:  http://mogsrescue.rescuegroups.org/