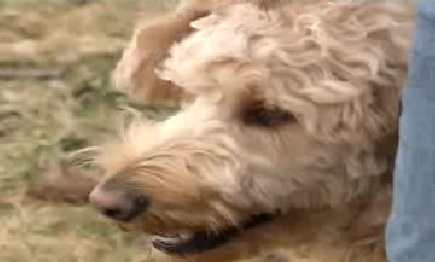 A dog named Jasper McLovin can thank his lucky stars that he’s alive after a miscalculated jump landed him in a river 300 feet below.

The Rochon family was walking Jasper through Riverside State Park in Washington.  The park overlooks the scenic Spokane River.  Twelve-year-old Marshall and Jasper were racing to an overlook point.

“There’s a rock wall and he wanted to see what was on the other side,” Michelle Rochon said.

But the goldendoodle didn’t stop when they reached the edge.

Jasper fell all the way down and into the river.  The Rochons feared what they might see when they looked over the ledge.

“I see Jasper and he’s all wet and he’s looking at me like ‘Please help me,'” said Marshall.

Jasper managed to swim to the riverbank, where he was met by an anxious family that rushed him to Dr. Joe Peterson at the North Division Animal Medical Center.  Dr. Peterson could only expect the worst.

“As a minimum (he’d have) major fractures, bleeding in the chest cavity, skull fractures,”he said.

But miraculously, Jasper walked away with only a bruises to his liver, lungs and a scratch on his leg.

“Luckily, no bones were broken,” Michelle said. “I can’t believe it.”

“For him to walk away from this with nothing more than a scratch and something that was easily resolved in his chest is really pretty amazing,” said Dr. Peterson.

Though it is rare for a dog to leap from such a height, the Rochons will likely be keeping a much closer watch on their daring dog.