Pickles is just three months old, and already life is an uphill battle for him.  Not only has he suffered abuse at the hands of some horrible humans, but was dumped on the side of the road and left for dead as well.  After being rescued, doctors discovered a heart condition that requires immediate surgery for him to survive, and grow up to be trained as a therapy dog.

Some good Samaritans came across Pickles after he was abandoned.  They weren’t sure just what to do with the poor little guy, so they called Nikki Johnson.  Johnson has fostered a great deal of dogs over the past few years, and knows just what to do in these situations.

“I had sent the information to my boyfriend and said I think we could potentially foster this guy,” said Johnson.  “He won’t take long to find a home, he’s a puppy, super cute.”

Johnson immediately noticed signs of abuse on Pickles.  There was scarring where his ears had been cut, forcing him to have to wear a special hat while in the rain to protect him.

“They only cut the ears off to make them look mean.  That’s why they do that to pit bulls,” said Johnson.

One would figure the little guy to be terrified of people because of what he was put through.  However, Johnsons says that’s not really the case.  In fact, she believes that he could become an amazing therapy dog if trained properly.

“I think anybody would be terrified of people if you were held down as a child and your ears cut off,” said Johnson.  “But he loves everybody.”

Johnson took Pickles in to see the doctors, and that’s when his heart condition was discovered.  He has stage 5 pulmonic stenosis, which is potentially fatal.  Vanessa Rangel-Miller also has a dog with the same medical condition as Pickles, and knows all too well the dangers it comes along with.

“He was already abused, left by the side of the road,” said Rangel-Miller.  “Then we find out that there’s even more, that he has medical conditions.”

She is trying to spread the word about Pickles and his condition, reaching out to the community for help with getting him cared for.  She also strongly believes that Pickles could be a great therapy dog.  His sweet and loving temperament would be just right.

“This dog has the potential to really help a lot of other people and a lot of other kids, and I’d like to do anything I can to make that happen,” said Rangel-Miller.

Johnson is very thankful for the help in reaching out to the community.  She’s amazed that so many people already have helped out with Pickles’ care.  If you’d like to see more about Pickles, watch his progress or donate to the cause, you can check out his special Facebook page by clicking here. 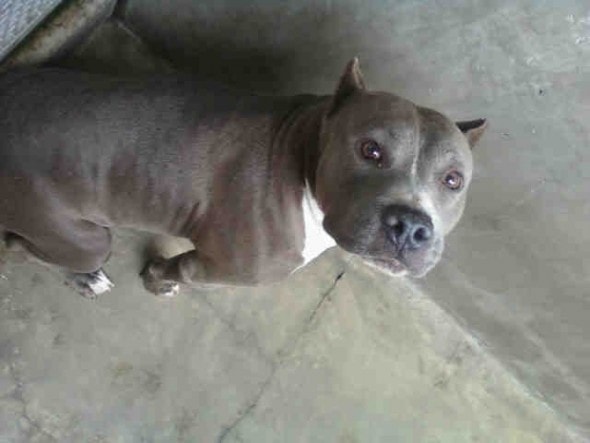