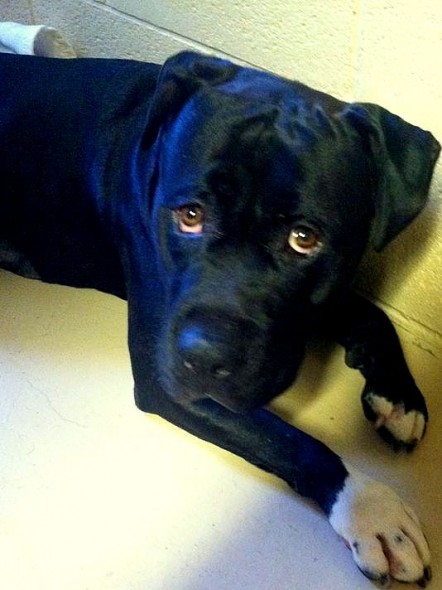 Because of the compassion and quick actions of a sergeant with the Washington County Sheriff’s Office, a badly injured dog’s life has been saved.  The poor thing had been shot by an arrow, but now is recovering.

Sgt. Kurt Bowen was driving along Old Highway 91 near the Arizona border when he saw a pit bull-type dog that had been pierced through the abdomen.  He initially thought the dog had been shot, and called for assistance from the Ivins City Animal Shelter.

In the meantime, Bowen did what he could for the dog, whose intestines were spilling out.  He quickly bandaged him and gave him some water.

“The dog, surprisingly enough, was standing up.  He was very friendly. Just a really sweet boy,” said shelter director Agnes Smith, who arrived shortly after.  “(Bowen) helped me stick him in my truck, and I took him to the Red Hills Animal Hospital.  Dr. Scott Hannig took him in, and he was wagging his tail the whole time. They put him up on the table and he finally just collapsed.”

It took staff three hours to repair the wounds, which had been caused not by a gunshot, but by an arrow, making it the third of this time of injury in the area recently.  The dog was called Sarge, in homage to his hero.

Smith said the sheriff’s department has even offered to help pay for Sarge’s medical care.

“I was impressed with the sheriff and the responding officer,” she said. “If (Bowen) hadn’t stopped, the dog would be dead.”

If you know who is responsible for these heinous activities, please click here.