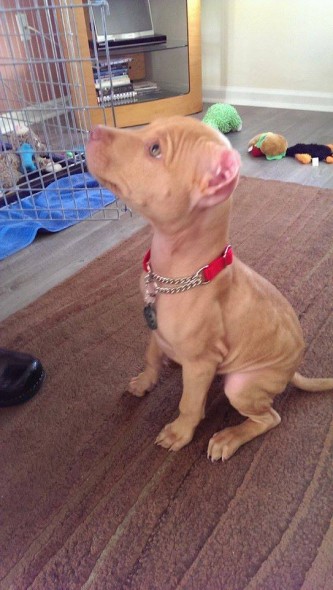 A pit bull puppy named Van Gogh, who last month was brought to an animal clinic with both his ears cut off, has found a new home. His former owner has been charged with two counts of animal cruelty.

In October Van Gogh was brought to Stoney Creek Veterinary Hospital by a woman who claimed to have found him abandoned under a bridge in Upper Darby, Pennsylvania. That woman, 19-year-old Kristina Murphy, later confessed to being the one responsible for Van Gogh’s injuries.

Murphy claims Van Gogh had fleas and scabs on his ears and she accidentally cut his one ear off while trying to clean off the scabs. In a panic she cut the other ear off and then claimed to have found him abandoned so he could receive medical care that she could not afford.

After further investigation, Murphy, who had a dog walking business on Craigslist and worked at a local pet store, surrendered ten other pets to the Delaware SPCA. She has been charged with two first-degree misdemeanor counts of animal cruelty and one summary count for failure to provide veterinary care.

Van Gogh is recovering well and the Delaware County SPCA announced on Monday that he had found a good home. Stoney Creek Veterinary Hospital’s own veterinarian Dr. Johnson and her family have welcomed Van Gogh into their family and will be giving him the loving home he deserves.