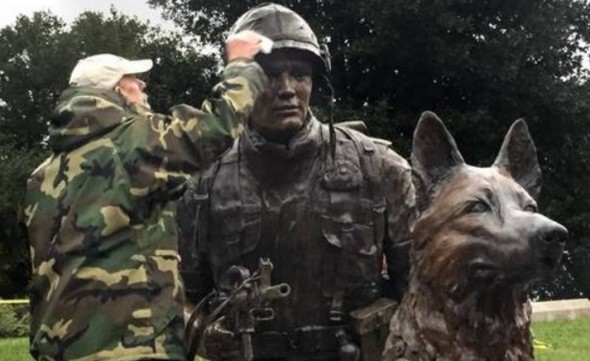 A special statue, designed to honor the men, women and dogs that fought in Vietnam has been unveiled in Columbia, South Carolina.  The commemorative statue hopes to honor the military dogs and their handlers for their brave service to this country.

On hand for the unveiling was Johnny Mayo of Lexington County.  He and his scout dog, Tiger, lead a foot patrol from Landing Zone English near Bong Son in South Vietnam.  Their job was to search and detect snipers and ambushes before the 173rd Airborne Unit got to them.

One day, while out on patrol, he and Tiger were doing what they did best, helping to make sure everything was safe for the rest of the company.  That’s when Tiger went up ahead of Mayo, and slipped under a tree limb.  The limb was rigged to explode, and Tiger lost his life, but saved the entire 173rd from total destruction.  Mayo has NEVER forgotten Tiger, and he is the inspiration behind the statue.

At a special ceremony, held today rain or shine, the statue will be dedicated to the memories of the brave soldiers that fought in Vietnam.  The statue has a military dog handler along side his canine companion.

Tiger was one of over 4,000 dogs that served in the conflict.  Of the 800 who died in the war, many more dogs returning were euthanized after the war.  Today, that isn’t the case as many returning dog handlers are allowed to be reunited with the dogs they served with, which is a much better way of doing things in our opinion.

Let’s take a moment today, and thank all of the brave men, women and dogs that fight to keep America safe.  Thank you soldiers, and God bless you all.