A North Carolina man says that despite his service to our country, his service dog is not welcome at the nursing home he’s employed by.

Ray Kirby said the Brian Center Nursing Home in Lexington told him he could no longer bring his golden retriever, Doc to work with him. Doc was prescribed to Kirby in January to help him cope with the crippling symptoms of post traumatic stress disorder. 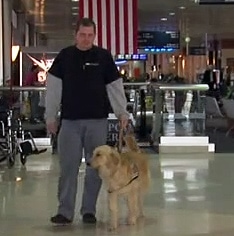 “Since I’ve had Doc since the beginning of January, he’s changed my life. I have a reason to live,” Kirby said.

Dave Cantara trained Doc, and says that for veterans with anxiety disorders a service dog can

“Especially for combat medics, they have that survivor’s remorse, which can be a very heavy weight to bear,” Cantara said.

To some degree, that weight was lifted when Doc came into Ray Kirby’s life, and he says he can’t understand why his employer has told him his dog is unwelcome in the workplace. They offered no explanation.

“At the facility, they allow pets to be there and other service animals, and here I am denied access with my dog,” Ray said.

Kirby scheduled a meeting with the Brian Center’s staff and flew in Dr. Joan Esnayra, an advocate who heads the Psychiatric Service Dog Society in Washington DC. When they arrived for the meeting, they were thrown out.

“We were told there is no meeting and that we needed to leave immediately. I felt badly for my hosts who brought me down here because it was very expensive to fly me here for the day, and that money has been wasted now,” Dr. Esnayra said.

“When they asked us to leave, that solidified in my mind that we’re dealing with someone who has character issues,” Dave said.

Federal law requires employers to make accommodations for people and their service dogs. As far as the law is concerned, Ray Kirby has been wronged.

The Brian Center issued the following statement to MyFox8:

In this case, the leadership team has evaluated the request of the employee and has developed a plan aimed at accommodating his needs. The facility is in the process of contacting the employee to discuss the plan.

As of late yesterday, Kirby said he had not heard from them.