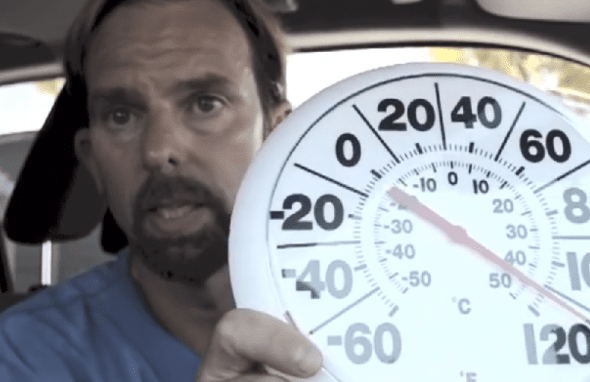 It is too often that we read about the danger of leaving dog’s in parked cars during the summer, yet it still continues to happen. To better demonstrate just what happens when you leave a dog in a parked car veterinarian, Dr. Ernie Ward filmed a video of himself in a locked parked car.

While many people know that leaving the dog in a car isn’t the best idea, many may still think that Levin the windows cracked while they leave for just a few minutes is still fine. Dr. Ward’s video quickly disproves this. Even with the windows cracked the temperature in the parked car begins to quickly rise to uncomfortable and dangerous temperatures.

“The whole point of this exercise was to see what it feels like. What would it feel like to a dog.” said Ward. “You’re helpless. You have no control over what’s happening. You don’t understand what’s happening.”

In just 30 minutes the temperature in the car reached as high as 116 degrees. It is an eye-opening visual of what it’s actually like for a dog in a parked car. Please share so all animal owners better understand the true danger of leaving your dog in a parked car during warm weather.