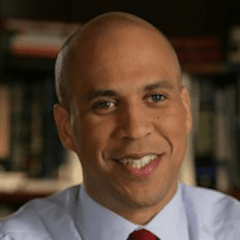 Cory Booker, mayor of Newark, New Jersey, has come to the rescue of yet another dog in need. When he was tweeted about a dog locked in a small crate on Thursday the mayor didn’t hesitate to go investigate the situation himself and called for help.

This isn’t Booker’s first time helping to rescue a dog. This past winter Booker came to the rescue of a dog left out in the cold.

On Thursday Booker received a tweet from @shankdog3000 asking if anyone in the Newark area could help a dog that had been left locked in a small crate. Booker responded asking for the dog’s location and immediately arrived on the scene to help the dog. Once he investigated the scene Booker called the Associated Humane Societies in Newark for their help.

Booker kept his twitter followers updated throughout the rescue. He thanked @shankdog3000 for reporting the dog and told his followers the situation was inhumane and cruel.

Scott Crawford from the Humane Society told U.S. News that the female pit bull is aggressive but they are hopeful her behavior will improve and that the behavior is most likely a result of her mistreatment. The dog will be kept on hold for seven days before the Humane Society can legally assume ownership. Her aggression will have to be addressed before she will be able to be adopted out.