Many dogs dread going to the vet’s office, and when an extended stay is in order, it’s extra scary.  Ruby was in to be spayed, and because she was so nervous, Dr. Ross Henderson sang Elvis’ “Can’t Help Falling in Love” to allay her fears.

Fox Hollow Animal Hospital in Lakewood, Colorado is pretty much a family-run business.  Henderson’s father Anthony and his brother Ryan are also vets there, and his brother Cole is an assistant, so it’s pretty clear that a love for animals runs in this family.

“I think he’s immune to it, though,” he told TODAY, noting that his dog, Charlie, is also “sick of me singing.”

But it helps animals like Ruby, who are scared to be surrounded by strange people, smells, and sounds in an unfamiliar place.  So Henderson wants to do whatever he can to set their minds at ease.

“They just love us like crazy.  You can’t repay for how much they give to us,” he explained.

So he and the patients go to the biggest kennel in the hospital and get cozy for a little while.

“Sometimes your patient just needs you to go the extra mile to make them feel comfortable when they’re here for the day to have surgery,” Fox Hollow posted. “Dr. Ross has mastered the technique and sweet Ruby was so thankful for that.” 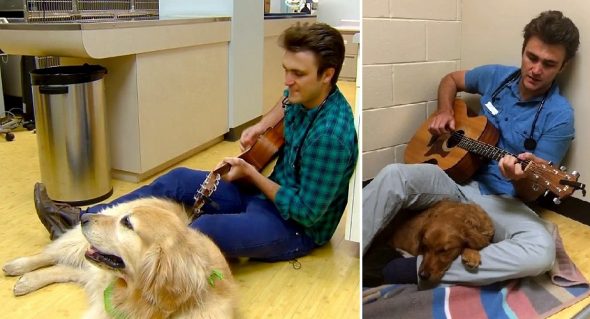