May 22, 2011 was meant to be a day of celebration. Joplin High School teachers Steven and Debbie Leatherman had just returned home from graduation ceremonies, honoring the achievements of students they had known and nurtured for the past four years.

Tornado sirens had been sounding and a quick check of the local weather station prompted them to head to the basement with their 10-year-old cocker spaniel, Sugar. Once in the basement, they switched on the television downstairs and found themselves watching live coverage of a massive tornado barreling toward Joplin. According to their son, Daniel, a student at the University of Missouri, their anxiety increased and they decided to seek the additional safety of a concrete-walled storm shelter within the basement. However, Sugar, sensing the increased fear of her owners, became panicky and bolted back upstairs to her own “safe area,” a spot under one of the beds.

Sugar, a 10-year-old cocker spaniel, was brought to the University of Missouri Veterinary Medical Teaching Hospital after the May 22, 2011 tornado in Joplin. A spinal injury had resulted in her hind legs being paralyzed.

Debbie Leatherman tried to pursue the family pet, but her husband grabbed her and pulled her back into the safety of the shelter and closed the doors above them. Less than a minute later they could hear the twister tearing their house apart.

When they emerged from the shelter, debris was all that remained of their home and Sugar was missing. Daniel drove home to Joplin from Columbia and the following morning the family began picking through the rubble of their possessions, dreading the possibility that they would find their dog’s body. Meanwhile, in neighboring Kansas, Daniel’s aunt began a search of her own, combing through social network sites for some clue to Sugar’s whereabouts.

And then a breakthrough. A Facebook page revealed that a dog resembling Sugar had been taken to the Joplin Humane Society. A good Samaritan had found the injured animal in a flooded storm ditch several blocks from the wreckage that was the Leathermans’ house. Paralyzed, Sugar had been unable to pull herself to safety and was in danger of drowning had she not been rescued when she was.

With much of Joplin in ruins and resources stretched, the Joplin Humane Society veterinarian advised the Leathermans to seek care for their pet in another city. Daniel Leatherman called the University of Missouri Veterinary Medical Teaching Hospital, where veterinary neurology technologist Stephanie Gilliam advised him to bring Sugar in. The following morning, Daniel Leatherman, his car converted into a makeshift dog ambulance, drove Sugar to Columbia.

At the MU Veterinary Hospital, Sugar was immobilized and prepared for radiographs and an MRI. Fred Wininger, an assistant professor of neurology and neurosurgery in the College of Veterinary Medicine, examined the dog and noted that while she had no use of her hind legs, she retained pain sensation in her paws. He determined she had sustained a traumatic T12-13 intervertebral disc rupture. 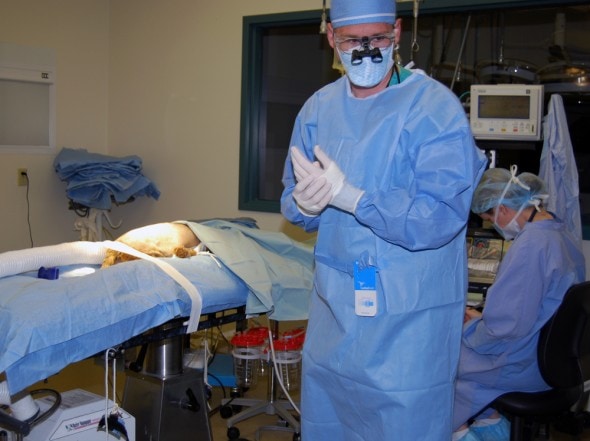 Wininger explained: “The intervertebral disc is like a jelly donut that is soft at its core and harder on the outside. Its function is to cushion the vertebral bones around the spinal cord. With severe enough injury, the “jelly” center, also known as the nucleus pulposus, can extrude out of the shell and compress the spinal cord.”

The rupture caused severe bruising to Sugar’s spinal cord and mild subluxation, or malalignment or the bones.  Time was critical, Wininger said. With pain sensation intact, immediate surgical intervention allows more than 80 percent of dogs to regain function in their legs. Wininger performed a surgical procedure known as a hemilaminectomy, which created a window in the vertebral bone allowing him to decompress the disc and hemorrhage that was pushing on the cord.

The bruising that already occurred would require time and physical therapy to heal.

Two days after surgery, Gilliam, who provides rehabilitative therapy to veterinary neurology patients, began electrical stimulation on Sugar’s hind limbs to help prevent muscle atrophy. Sugar received the treatment once per day for seven days. Gilliam alsobegan underwater treadmill therapy once per day to find signs of movement in the dog’s hind limbs. On June 6, two weeks after the tornado, Sugar began to show movement in her hind legs for the first time. Gilliam and the neurology team continued the underwater treadmill therapy once per day and started additional therapeutic exercises to help Sugar strengthen her muscles.

The Veterinary Medical Teaching Hospital through its Silent Partners Fund and College of Veterinary Medicine absorbed the cost of Sugar’s treatment and therapy. Orscheln Farm and Home in Columbia also helped out by donating food and toys to help with Sugar’s care.

A little more than a week later, on June 14, Daniel Leatherman collected the family’s beloved pet to continue her recovery at home. “We are so warmed by everything that has been done,” he said. “It has given us back our family.”