During the first week of August, a man walking his two dogs in Almeria, Spain, found an injured dog tied to a light post. The dog was almost unconscious and suffered a deep stab wound on his neck, but thanks to the animal lover, volunteers from El Refugio (a local animal shelter) rushed to rescue the dog. 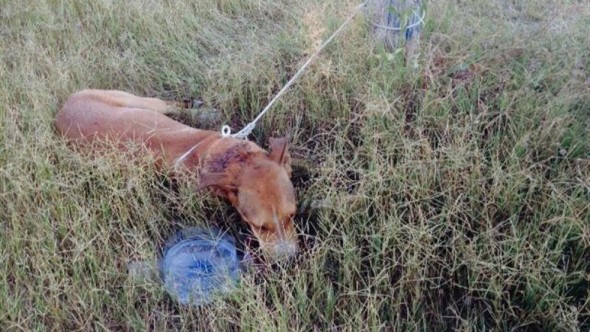 Named Naif, the one-year-old dog was rushed to a veterinarian clinic, and there a medical team saved his life. When found, the pooch had his legs tied together and rope wrapped around his torso was secured to the light post.

According to Nacho Paunero, El Refugio’s president, someone purposely left the dog there to die a slow and painful death, but fortunately the pet was found on time.

Naif is recovering well and rescuers hope to find him a loving forever home soon.