The U.S. Department of Justice has historically fought against profiling. Now, through its final rule on accessibility standards in accordance with the Americans with Disabilities Act, it has also come out against canine profiling. 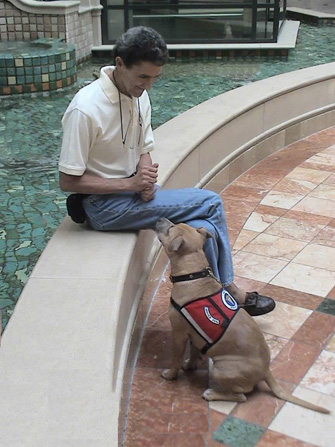 The issue arose because some communities that have enacted laws that discriminate against certain breeds of dogs. Today, American Pit Bull Terriers are the targeted breed, even if they are assisting the disabled by working as service dogs. Just ask Sam Dworkis, who has multiple sclerosis. He has a wonderful pit-bull-type service dog named Poppy, who retrieves items for Sam and wears a special harness so he can help Sam remain stable while he walks. He’s a great service dog.

But some cities such as Denver and Aurora, Colo. have been sued for interfering with service dogs and this topic has been the subject of two federal lawsuits. With the new Justice Department regulation, the issue is now decided: Cities cannot discriminate against service dogs simply because of their appearance.

“The Department of Justice developed a well-reasoned and sensible approach to preserving the rights of those with disabilities,” said Ledy VanKavage, legislative analyst for Best Friends Animal Society, who is an expert on reckless owner/dangerous dog laws in the United States.

VanKavage pointed out that people often are unaware that pit bull terrier type dogs are not the only breed suffering from breed discriminatory ordinances and laws. Many cities also regulate or prohibit common service dogs like German Shepherds, which not only are common service dogs for people with disabilities, but they also serve cities in search and rescue and law enforcement.

The rule reads: “Others have restrictions that, while well-meaning, have the unintended effect of screening out the very breeds of dogs that have successfully served as service animals for decades without a history of the type of unprovoked aggression or attacks that would pose a direct threat, e.g., German Shepherds.”

“Other jurisdictions prohibit animals over a certain weight, thereby restricting breeds without invoking an express breed ban,” the rule states. For example, Fairfield, Iowa, prohibits any dog over 100 pounds.

“In addition, deference to breed restrictions contained in local laws would have the unacceptable consequence of restricting travel by an individual with a disability who uses a breed that is acceptable and poses no safety hazards in the individual´s home jurisdiction but is nonetheless banned by other jurisdictions.”

The rule does give local governments the authority to strictly regulate or prohibit certain dogs based on behavior, but may not regulate such dogs based solely on the way they look.

“State and local government entities have the ability to determine, on a case-by-case basis, whether a particular service animal can be excluded based on that particular animal´s actual behavior or history–not based on fears or generalizations about how an animal or breed might behave.”

The Department of Justice says the ability to exclude an animal whose “behavior or history evidences a direct threat” is sufficient to protect health and safety.

Best Friends Animal Society is dedicated to helping keep communities free from breed discriminatory legislation. For more information on how to keep your community free from this type of legislation, visit:
Best Friends Anti-Breed Discrimination Resources