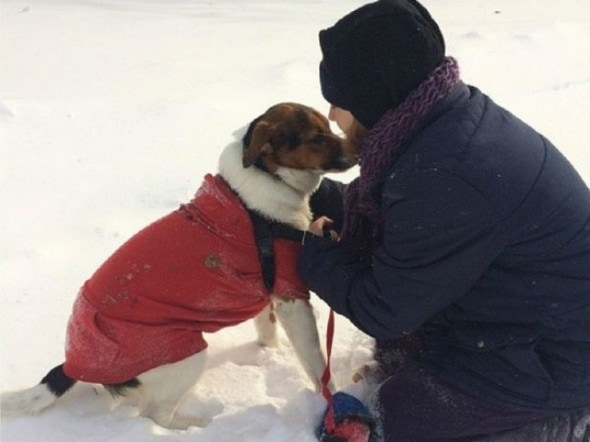 When a beagle named AJ went missing after a car accident in Brownsburg, Indiana volunteers braved sub-zero temperatures to find him.

AJ was in a car that flipped over several times on Interstate 74 last week. AJ was thrown from the vehicle and went missing. As word spread about AJ several animal rescue volunteers organized search parties over the weekend to try to find AJ and bring him out of the freezing cold.

On Monday their efforts paid off. Someone spotted AJ, but was unable to capture him. So they posted on the message board Indy Lost Pet Alert. Katie Faircloth saw the post and began searching streets near where AJ had been spotted.

Thanks to information spread by social media and AJ’s owner Faircloth knew the best way to approach AJ. She knelt down, reached out her hand and used the phrase AJ’s owner typically uses with the dog, “Let’s go.”

AJ responded and came closer to Faircloth who quickly got a hold of him.

“I just grabbed him for dear life,” said Faircloth.

Once Faircloth had AJ, he was taken to a local veterinarian for treatment.

AJ’s owner, who was hospitalized due to the crash, was reunited with AJ at the clinic.