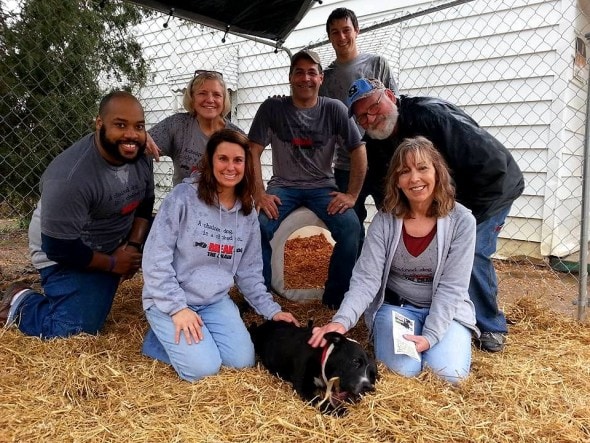 Break the Chain Kennel Kru out of Guilford County, North Carolina has one goal in mind; put an end to tethering.  They want to show people that tethering is not just dangerous to your dog, but as they like to put it, “A chained dog is a choked soul,” and you have other options.

According to volunteer Andrew Mayon, “A chained dog is a choked soul, and we believe that any dog on a chain is not living a proper life.  That’s the reason we started this organization.”

The newly form advocacy group was started this past November.  Their goals are pretty clear.  They want to educate people about local tethering laws, and wish to help those in need by giving them access to free kennels.  Their goal is no more dogs on chains, being left in dangerous situations.

Recent laws passed in the area have finally made it illegal to leave your dogs chained up outdoors for extended periods.  The laws took effect this past November, and there is a bit of a “grace period” that law enforcement is allowing to make sure everyone is well aware of their responsibilities.  However, that grace period is over after this coming November, and if you’re caught breaking the law, there will be a zero tolerance policy in effect.

Break the chain is taking things one step further.  If residents are on public assistance, and are willing to have the animal spayed or neutered, they can have a free kennel constructed in their yard, complete with a demo on how everything works.  Before they consider a job done, they make sure the homeowners know exactly what law enforcement will be looking for, and what is considered breaking the new tethering law.

Break the Chain’s first family in Guilford County is called the Parkers.  Their dog, Tank, has a new enclosure, and the family is very thankful for everything that’s been given to them.  Tank now has his own, personal kennel, complete with cover and straw bedding.  Breaking the Chain came out to the Parker residence and not only constructed everything for them, but also showed them how it worked, and made them aware of what the possibilities are if they do break the new laws.

The program is brand new, but they’ve already made sure that four qualifying families are in compliance with the new laws.  They’ve also helped out in a neighboring county that already had tethering laws in effect.  The goal is to get to at least one family a month from each of the counties that they cover.  Who knows, with a bit of help and support, we could be seeing these crews popping up all over the country.

For more information on the Break the Chain Kennel Kru, and to see the amazing before and after photos of dogs on chains enjoying their new digs, you can check out their Facebook page by clicking here. 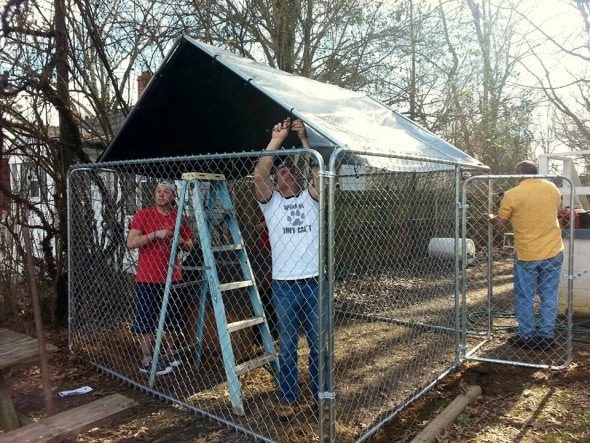 This comes from Sylvia, founder of Break the Chain:

As many of you know, my husband Andrew and I (along with the help of volunteers) have been doing kennel builds to unchain dogs who are not fence eligible. We have decided to become an official organization called “Break the Chain Kennel Kru” in loving memory of my father, Gerhard Messer, who unexpectedly passed away on April 26, 2015.

My dad was a perfectionist and a hard worker. He was constantly building or creating something. Every job he did was done with the highest attention to detail. He was also well known in his community for the various charitable work he did. I felt that building kennels to help families & their dogs in these under-served communities would be a perfect way to honor him while combining both of our passions.

For the last two years, I have prayed that I would find where I belong in the animal rescue world. After being an outreach volunteer for the last year, I knew that it had to involve helping chained dogs.

In October, we revisited a wonderful family while doing outreach. They had their dog “Cash” neutered thru Project BARK’s spay/neuter program. After talking with Cash’s family they shared that they may have to surrender him because they couldn’t afford the tethering fine. (He was chained because he kept jumping over their 4ft fence.) Andrew and I looked at each other and asked, “What if we raised the funds to build Cash a nice kennel with a tarp? Would you accept our help?” Cash’s mom, with tears in her eyes said “Absolutely!”

Determined to help Cash and his family, we reached out to friends and family asking for donations to help purchase his kennel and tarp. On November 8, 2015, four of us along with Cash’s family built him his kennel. It took us three hours, but it was so awesome to work with Cash’s family to help him. Once we completed the build, we unchained Cash. Seeing how happy he was, on a bed of straw instead of the mud he was used to, and chewing on his new toy, Andrew & I got in the car and said.  “This is what God has called us to do!” Not only did Cash’s family help us build their kennel but his dad also helped us build his neighbor’s kennel on December 26, 2015, and they are donating the straw for Max’s kennel! 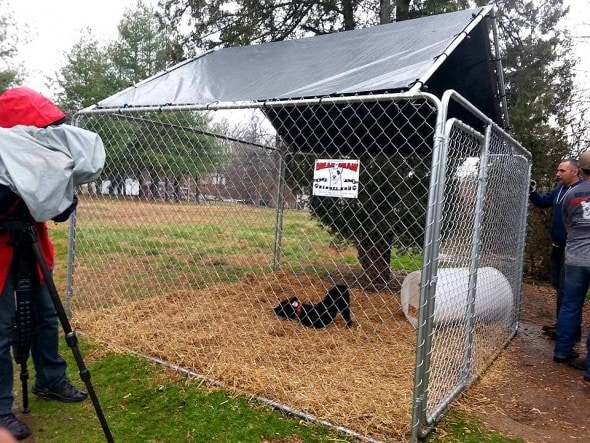