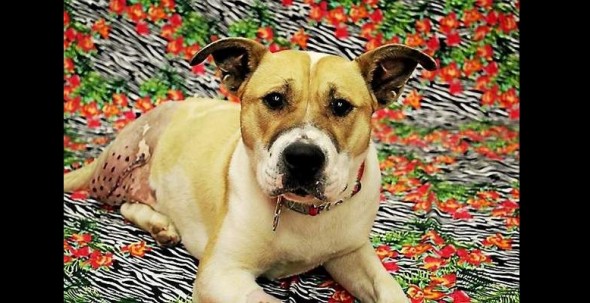 UPDATE: You can check out our initial coverage of Courtney’s story by clicking here.

We covered Courtney’s story earlier this month.  Basically, this poor creature was abandoned out back behind a Walmart.  In an effort to get free of her bindings, Courtney chewed off her own leg.  Now, hoping to help ease the cost of caring and housing Courtney during her recovery, Walmart is holding a fundraiser for her.

Walmart says that it will match donations made to Courtney’s fundraiser.

On January 18th, after a passerby noticed the dog chained up to a post, police were called out to the scene.  The metal cable she had been tethered to have wrapped it’s self around her leg so tightly, it had become embedded down to the bone, and Courtney simply finished off the job by chewing the rest of the leg off.

Courtney was then taken to Advanced Animal Emergency.  To prevent any infection, doctors cleaned up what was left of the leg, and now Courtney is on the road to recovery.  Courtney’s after care will be taking place at a local non-profit organization called 4 Paws 1 Heart.  You can visit their Facebook page by clicking here as well.  Courtney’s fundraiser will be held this coming Saturday at the Walmart at 28804 Gratiot, at 12 Mile Road, Roseville.