On August 6, 2015, volunteers from Os Pallerois (Protectora de Animales “Os Pallerois”), an animal rescue organization in Spain, couldn’t believe what they saw on surveillance video, but thanks to that video, police are looking for two men who cruelly tossed a friendly dog over the shelter’s metal fence. 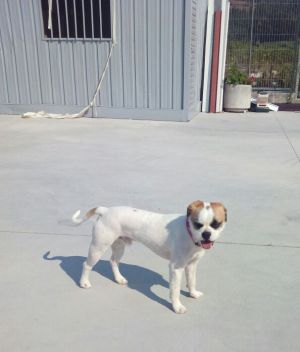 The sun was still shinning when a red, four-door vehicle approached the entrance of the shelter. A man wearing black pants and a blue sweater walked towards the gate carrying a small to medium size white dog. The man tried to throw the dog over the fence, but his initial attempt fell too short and the dog’s body crashed against the top of the fence.

The pet clung to his life as best as he could by grabbing hold of the man’s arms. A second man exited the vehicle and with the help of the second animal abuser, the men climbed the fence, raised the dog over it and then dropped the pet on the other side of gate. The two men then quickly ran back to the car and drove away. (You can watch the surveillance video here.) 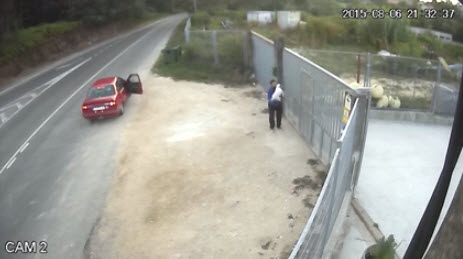 “They grabbed [the pet] by the collar and raised him,” a rescue volunteer told ABC.es. “It looked like they were going to strangle him.”

Os Pallerois’s staff have named the dog Krugui and are working towards gaining his trust. They are also working with local authorities to identify and apprehended the criminals who abandoned the pet. 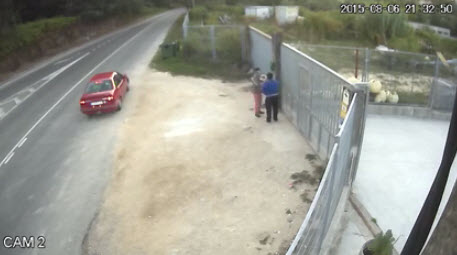 The animal organization rescues homeless and abandoned dogs, but it doesn’t accept owner surrendered pets, this is why they believe Krugui’s owner decided to illegally drop him off at the shelter’s entrance.

The abandoned dog did not suffer any physical injuries but he is very traumatized. For now he avoids any human contact and whenever he is off leash, he runs to the gate. Krugui does allow women volunteers to pet him but is very wary of men. 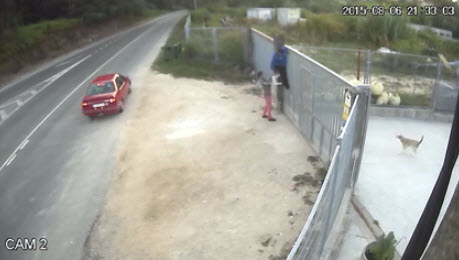 The criminals have yet to be identified and if arrested they will have to pay fees between 5,000 and 30,000 euros.

Os Pallerois has received a few calls from people interested in adopting Krugui but an adoption has not yet been finalized.