PETERSON AIR FORCE BASE, Colo. — Gina was a playful 2-year-old German shepherd when she went to Iraq as a highly trained bomb-sniffing dog with the military, conducting door-to-door searches and witnessing all sorts of noisy explosions. She returned home to Colorado cowering and fearful. When her handlers tried to take her into a building, she would stiffen her legs and resist. Once inside, she would tuck her tail beneath her body and slink along the floor. She would hide under furniture or in a corner to avoid people. 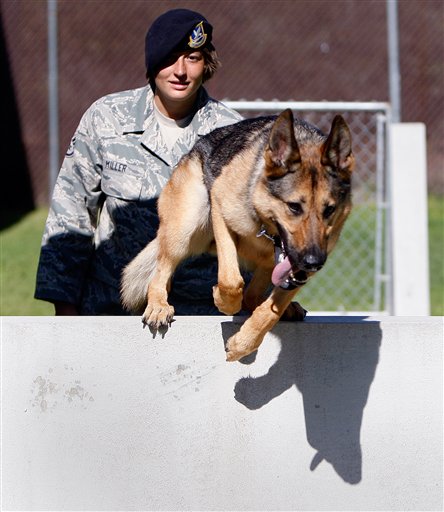 A military veterinarian diagnosed her with post-traumatic stress disorder — a condition that some experts say can afflict dogs just like it does humans. “She showed all the symptoms and she had all the signs,” said Master Sgt. Eric Haynes, the kennel master at Peterson Air Force Base. “She was terrified of everybody and it was obviously a condition that led her down that road.”

A year later, Gina is on the mend. Frequent walks among friendly people and a gradual reintroduction to the noises of military life have begun to overcome her fears, Haynes said.

PTSD is well-documented among American servicemen and women returning from wars in Iraq and Afghanistan, but its existence in animals is less clear-cut. Some veterinarians say animals do experience it, or a version of it. “There is a condition in dogs which is almost precisely the same, if not precisely the same, as PTSD in humans,” said Nicholas Dodman, head of the animal behavior program at Tufts University’s Cummings School of Veterinary Medicine.

But some veterinarians dislike applying the diagnosis to animals, thinking it demeans servicemen and women, Dodman said. He added that he means no offense to military personnel when he uses the term. Jack Saul, a psychologist on the faculty at Columbia University’s Mailman School of Public Health, said PTSD is a diagnosis developed for humans, not dogs. “That’s not to say that animals can’t be traumatized. It sounds like this dog was traumatized from the experience of extreme stress and fear,” Saul said. “That causes an alteration in the animal’s nervous system similar to an alteration of the nervous system in humans.”

The military defines PTSD as a condition that develops after a life-threatening trauma. Victims suffer three types of experiences long afterward, even in a safe environment. They repeatedly re-experience the trauma in nightmares or vivid memories. They avoid situations or feelings that remind them of the event, and they feel keyed up all the time.

When Gina returned to Peterson last year after her six-month deployment in Iraq, she was no longer the “great little pup” Haynes remembered. 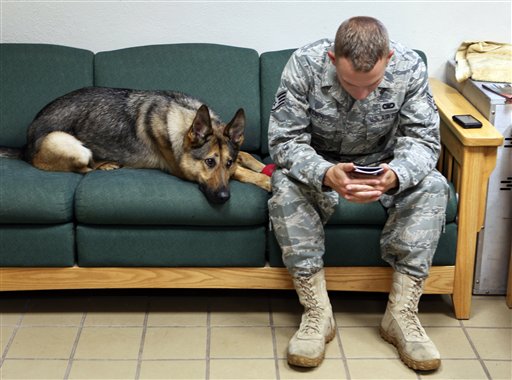 She had been assigned to an Army unit, and her job was to search for explosives after soldiers entered a house. The troops sometimes used noisy, blinding “flash-bang” grenades and kicked down doors, Haynes said, and Gina was once in a convoy when another vehicle was hit by an improvised bomb.

Back home at Peterson, Gina wanted nothing to do with people. “She’d withdrawn from society as a whole,” Haynes said. Haynes, who has worked with more than 100 dogs in 12 years as a handler and kennel master, said he has seen other dogs rattled by trauma, but none as badly as Gina.

Haynes and other handlers coaxed Gina on walks, sending someone ahead to pass out treats for bystanders to give her. They got her over her fear of walking through doors by stationing someone she knew on the other side to reward her with pats and play. They eased her farther into buildings with the same technique. “She started learning that everyone wasn’t trying to get her,” Haynes said. “She began acting more social again.”

On a sunny afternoon last week, Gina dashed across her training yard, jumping over obstacles on command and deftly pushing a ball with her forelegs and chest. On a visit to a store on base, she trotted calmly down the aisles and sat quietly when a woman bent to pet her. “She’s such a lovable dog,” Miller said, describing how the 61-pound Gina will lie in her lap. “I could literally hold this dog like a baby.” But Haynes said they’re careful not to let their affection interfere with good training. Treating Gina like a human — for example, comforting her when she’s frightened — can leave her thinking that her handler is pleased when she’s afraid.

“She’s just gorgeous and I love her, but you also have to balance it with — you have to do what’s right,” he said.

Gina has resumed some of her duties, searching cars for explosives at Peterson or other nearby military facilities. Eventually, she may be able to return to the kind of hazardous duty she did in Iraq, but that’s at least a year away, Haynes said. “We’re not planning on doing it anytime in the near future because obviously, we don’t want to mess up everything we’ve already fixed,” he said.

Dodman said he doubts Gina can recover completely. “It’s a fact that fears once learned are never unlearned,” Dodman said. “The best thing you can do is apply new learning, which is what (Gina’s handlers are) doing,” he said.

Haynes acknowledged that’s a concern, and although he hopes Gina recovers 100 percent he doesn’t know if she will. “Anytime someone has that much fear about anything, then obviously it will be hard just to get it fixed,” he said. “But, I mean, we don’t really have many other options,” Haynes said. “You can’t really give up on them. They’re your partner.”