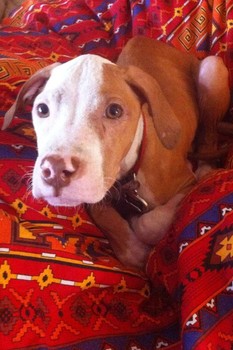 In early September Braveheart was found chained up and abandoned in a storage facility in Shreveport, Louisiana. Barely alive when he was found, the 4-month-old pit bull is on the road to recovery and a warrant has been issued for the person responsible.

When Braveheart was found on September 11th in the storage facility he was so malnourished at first those who found him thought he was dead. Authorities believe he had been abandoned there for several days. He was rushed to an emergency veterinarian hospital where he received life-saving blood transfusions.

For the past month he has been in foster care with Bo and Ronda Sparta as he recovers. On Wednesday Caddo Animal Control took custody of Braveheart pursuant of their investigation into his abuse. When animal control took custody of the dog there was an outcry that the dog would not get the care and attention he needed for his recovery.

Under the law animal control is required to take custody of the dog during their investigation. According to Caddo Animal Control Director Everett Harris under the law Braveheart cannot be released to anyone for at least 15 days, and then only after the investigation is complete. There was an overwhelming response as people contacted elected officials and over 10,000 signatures were gathered to petition the Parish Administration.

A “Free Braveheart” protest was organized for Friday to demand the dog be returned to his foster family. On Thursday night though the protest was temporarily called off when Braveheart was released to an anonymous veterinarian

“Braveheart is safe at a local vets, and is no longer under the control of Caddo Animal Control.” Justin Thomas wrote on the protest’s Facebook page. “At this point I am calling off the protest at Caddo Animal Control temporarily. With the understanding that if he is not returned to Bo and Ronda, they will see us along with several others.”

The Caddo District Attorney’s office has confirmed that an affidavit for the arrest of the person responsible for abandoning Braveheart is being drawn up.