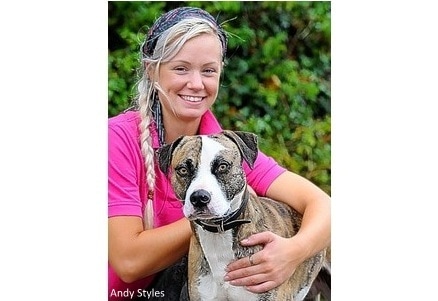 An injured bull terrier-lurcher mix is recovering after it was rescued by a couple from a river in the UK, where it had been stranded for two days.

The couple could hear a dog, but it was nighttime; they didn’t know where it was or how to help it.

“They heard some whimpering a couple of nights in a row and could not locate him,” said Jo Jones, kennel manager of Kingskerswell Kennels. “It was only when it was light that they saw him in the river and one of them waded in to get him.”

Laura Khanlarian and her guy found the abandoned dog with bruises on his back and a slash across one of his rear legs.

“We don’t know what happened but it is highly unlikely that he got in there of his own accord,” Jones said. “It is likely someone tried to dump him and he could have got injured as he tried to save himself.”

The dog, who was called River, is believed to have been marooned on higher ground toward the center of the River Exe in Exeter.

“He is gorgeous, so well tempered, lovely around people and other dogs,” Jones said. “He just wants to be loved.”