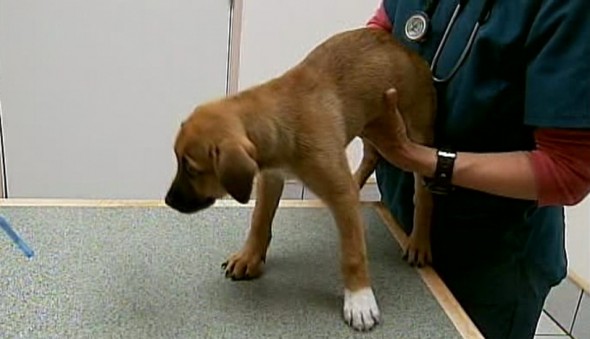 Brandi Luckey of Lacey, Washington may have saved the life of 9-pound German shepherd mix Bella when she witnessed her being horribly abused by three neighborhood kids, got the incident on film and stepped in to stop them.

“I’ve seen them beat her on the head and kick her,” Brandi said.

She says she witnessed the kids hit Bella with a broom, step on her, and throw her across the backyard.

“It makes me want to go down and strangle them, seriously,” she said in an interview given to KIRO 7 News.

Instead of throttling the hooligans herself, Brandi’s boyfriend shot a video of them doing this, while Brandi called Crime Stoppers, then animal services.  The video taken was shared with law enforcement and shown on KIRO 7 News.

Officers went and seized the puppy, and are demanding the mother of the three kids in the video answer for their misdeeds.  Brandi is convinced the mother knew what was going on.

“If I see this going on outside it makes me wonder what’s going on inside,” she said.

KIRO 7 News attempted to talk to the mother of the kids in question, but when they went to the woman’s door, no one would answer.

A vet taking care of Bella said x-rays were done and Bella is walking with a bit of a limp, but will ultimately by okay.

“They could have easily killed her, just stepping on her alone I’m surprised they didn’t break some ribs,” said Dr. Vicky Smith told KIRO 7 News, while holding Bella in an exam room.

Brandi is the hero here, and having stepped in, very well could have saved this puppy’s life.  Hearing that Bella will be okay is what Brandi was most concerned with, and hearing Dr. Smith’s general assessment, she feels a bit better.

“I can’t save them all but I can say I saved at least one and that makes me feel good,” said Brandi.

The video below is KIRO 7 News coverage of the ongoing investigation.