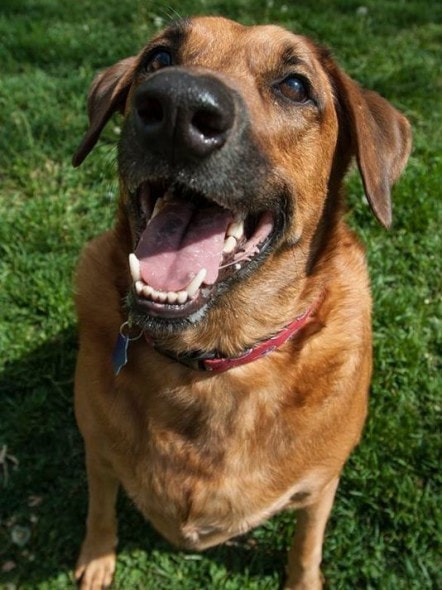 Eddie is a dog that has been saved twice now.  Once from a shelter in the Bahamas, and most recently, from traffic going along Colorado Boulevard, just before Fifth Avenue, by a local police officer.

Five-year-old Eddie had been staying with Becca Blond in Denver.  They were playing in her backyard this past Sunday when Eddie decided to hop over the fence, which almost sent her into traffic on the busy Boulevard.

“I was terrified he would be hit as he was weaving into and out of traffic.  I was running as fast as possible, but he was much faster,” said Blond.

Blond was taking care of Eddie while his foster mom was away for the weekend.  Eddie and his sister, Nellie were both rescue dogs given up to the Humane Society of Grand Bahama.  They were sent to Colorado by OutPaws dog rescue, also located out of the Bahamas.

The officer flipped on his lights and stopped traffic, which prevented both Eddie and Blond from causing a crash, or being hit by a car themselves.

“He put his lights on and stopped his car and traffic, which allowed Eddie to scoot in front of him and across the main road and away from harm. The officer then waited for me to catch up and told me to hop into the back of his patrol car,” said Blond.

He also sent out an APB (All Points Bulletin) on Eddie so any officers seeing him could assist with getting him under control.

Blond and Blakesly spent about twenty minutes canvasing the area before she got a call explaining Eddie was OK, and no longer running loose on busy Denver streets.

Eddie was fast, but carried a bit more weight than usual from the extra food and attention he’s been getting with the folks at OutPaws.  So when the portly pup headed east after crossing Colorado Blvd. near 6th Ave, he didn’t get too much farther.  He ended up passing out in a pool of water near Blond’s home.

A good Samaritan called the phone number on Eddie’s tags, and Eddie and Blond were reunited.

“If that police officer had not been in that spot and had thought to stop traffic, I’m pretty sure Eddie would have been hit and killed,” said Blond.

When Eddie and his sister were brought here by OutPaws it was because a suitable foster home for the both of them, together since birth, could not be found.  The pair were devastated to be split up, but Nellie has since found her forever home through My Second Home Rescue, and Eddie is still in foster care, searching for his.

They describe Eddie as, “A very loyal gentle giant.  He loves walks on the leash.  He likes to collect rocks and give them to you as ‘gifts.’  He loves his chest being stroked and falling asleep.”

OutPaws in entirely foster based and their goal is to find forever homes for many of what are considered “last chance” dogs  that might not be adopted right away, like Eddie.