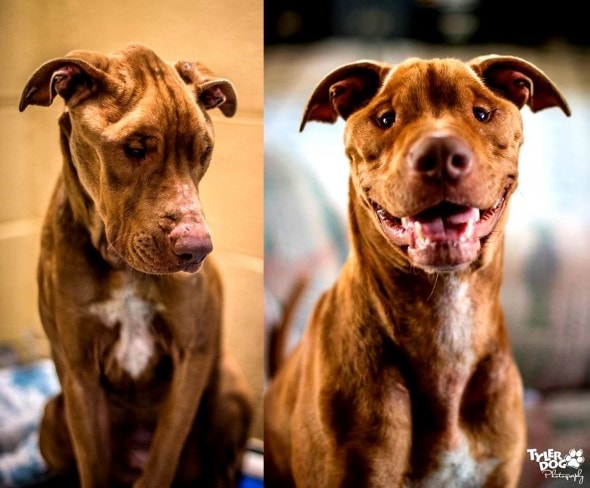 This was the question asked by an eight-year-old to a photographer who helps shelter dogs by taking special photos of them.  But this question with a not-so-simple answer inspired Sherry Stinson to not only highlight this dog’s need for help with photos, but to adopt her and begin the arduous recovery process herself.  Now the dog, named Destiny, is gaining weight and happy in her new home.

Sherry is an Oklahoma-based photographer, and each week she goes to a different shelter to take pictures of the animals in hopes that professional photos will help them find homes.

Her session on March 25th was a little different from most of the shoots.  She had a group of kids on their spring break tag along to Tulsa Animal Welfare, and when the photo shoot was over, they wanted to visit the dogs in the kennels.

Immediately upon entry, they came across what appeared to be living skeleton.  The red pit bull was weak and emaciated.  She had a scar encircling her neck: evidence of a miserable life on a chain.  She had been so badly starved that her body pulled nutrients from anywhere it could, causing the muscles in her head to atrophy.

One girl in the group, Desi, was particularly affected by the sight of this poor beast.

“What’s wrong with her?” she asked.

Sherry told her someone hadn’t taken care of her.

“Why would anyone do that?”

Though many things children ask have complicated answers, there was really only one thing Sherry could tell her:  there are some bad people in the world.  The answer to Desi’s next question was a bit more complex:

“We can just feed her and she’ll get better, right?”

Understanding how limited shelter resources can be, and how severe this dog’s condition was, she replied nevertheless, “of course.”

The photographer and her crew left, but she spent her night haunted with images of the doleful dog.  She knew what she had to do.  Sherry had to save that dog.  The next day she went, armed with treats.

This dog had been badly abused, and was more than hesitant to trust again.  But Sherry took her time, plying her with treats.  Slowly, the dog warmed up enough to allow the woman to take her for a walk.  Sherry convinced the shelter to call her as soon as the stray hold was up, as it was quite obvious she wasn’t being claimed.

Though Sherry usually doesn’t return to the individual kennels after the shoots, she did that day because of the curious children.  She felt it was meant to be, and named the dog Destiny.

Now Destiny has joined Sherry’s brood, where she is gradually becoming accustomed to being part of a real family.  She gained twelve pounds in two weeks, but it is not certain whether or not the muscles in her head can be restored.  Sherry is amazed at how gentle this girl is, and how well she’s learning to play with her siblings.

A dog named “Unknown,” whose only destiny was euthanasia, now has become known and loved across the country.  She has her own pages on media sites, with posts spoken from her point of view.

“Last night as I was getting sleepy, Mama laid down beside me on the couch. I crawled up in her arms and kissed her a few times, nibbled her ear, then did my big sigh. She whispered in my ear, ‘Are you happy, baby girl?’  All I could do was wiggle my tail, but what I wanted to say was, ‘Mama, lying in your arms makes me feel safe, loved, and so, so happy! Every time you call me baby girl, I just wanna cry because it sounds like music to my ears.’ I know one thing, if this is a dream, don’t wake me up ‘cause I love being loved like this.”

4 thoughts on ““We Can Just Feed Her and She’ll Get Better, Right?””