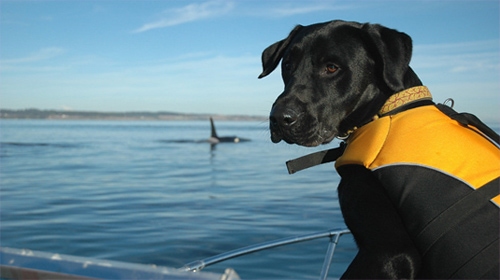 From the jobs you never knew existed category: Tucker uses his keen sense of smell to assist researchers in determining why a killer whale population off the northwest coast of the US is declining. He sniffs for whale feces floating in the water:  scientists then collect the floating waste for analysis. Tucker is one of an elite team of whale detector dogs used by scientists in an effort to understand and protect a number of whale species, including Killer Whales.

This particular pod of Orca inhabits the waters between Vancouver Island and the US Pacific coast. There are about ninety individuals in the community, and in recent years numbers have been dwindling. Two years ago, about one in ten died. Several years earlier, one fifth of them were lost. 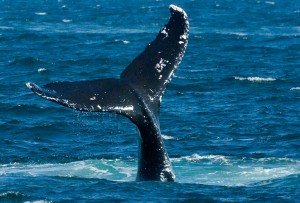 Whale feces is loaded with biodata about an animal’s stress levels, fertility, nutritional status and pollution exposure levels in blood. Because whales live below the surface of the water, and due to a think layer of blubber that makes blood sample collection nearly impossible, this is one of the most effective ways to study the massive mammals. A trained dog’s nose enables researchers from the University of Washington in Seattle to find whale waste in much greater quantities than by relying on their own human senses. 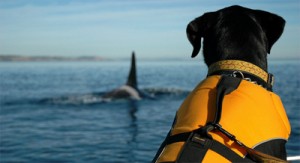 Tucker’s work will help scientists to arrive at explanation for why a special population of killer whales in North America is at risk of extinction, and will hopefully allow for more effective preservation measures as researchers gain a better understanding of the magnificent, mysterious creatures of the deep sea.

Conservation Canines at the University of Washington