The leading cause of fearful behavior in dogs is the lack of appropriate socialization when the dog is 3-16 weeks of age. I use the term ‘appropriate’ specifically because many people have the idea that simply exposing a dog to lots of people and other dogs when they are young is enough. However other causes of fearfulness in dogs may be- a genetic predisposition to be easily frightened and fears learned through trauma or abuse. If a young dog is scared by early exposures to people, or other dogs, they are more likely to carry that response with them as they age. 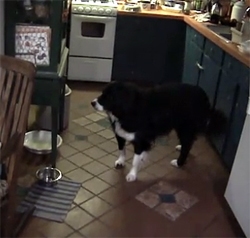 Identifying the tendency to be easily frightened in young pups is important, biology needn’t be destiny and a dog can learn skills for coping socially. Forcing a timid pup to ‘deal’ with things that scare them quickly backfires should those experiences frighten the dog. Protecting a young pup from inappropriate greetings from other dogs is important. Puppies are learning what things predict in their life, and if another dog predicts being pounced on or startled, the pup will come to anticipate this when seeing other dogs, and may respond with their own inappropriate greeting of lunging and barking.

This lack of exposure to different people, other dogs and novelty, during early puppyhood, is irreparable. Some dogs, those with more tolerance and resiliency (i.e., they weren’t as scared by things as other pups were) can learn to be comfortable in their worlds, while others may always carry proof of this deficit in the way they respond for the rest of their lives.

Dogs at greater risk for being fearful are those: bred at puppy mills or puppy farms or by any breeder who does not provide early enrichment or socialization of pups; puppies born to hoarders; and feral or ‘street’ dogs. In my own experience the pups with the best chance of being able to learn new skills are the dogs born out of captivity, but around people-the street dog. Dogs born in confinement also suffer from the lack of movement and exploration a street dog is privileged to experience.

The following video is of my own fearful dog Sunny. It was filmed after Sunny had lived with us, in the same house, for over 5 years. I had introduced a novel object to the environment, a leather bag drying by the wood stove. When he first encountered it he left the room and was only willing to return through coaxing and my invitation to ‘go outside’. You can see his concern in his movement and posture.

With time and experience Sunny would ‘get used’ to the bag, but as with many dogs who suffer from neophobia-fear of new things or experiences- changing the location or position of the bag would again provoke similar concern. As a dog’s comfort level increases in a specific environment their ability to cope with novelty can increase, but change too many aspects of a situation and you can see a rise in sensitivity.