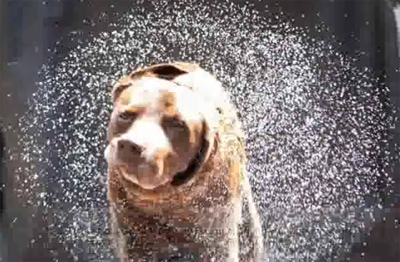 Dogs, of course! Who among us has not been pelted by freezing rain flying off of our dogs as they find the perfect position (as close to us as possible) and let it all fly? I’d love to tell you that there is a cure for Close Proximity Shake Disorder, but sadly, that is not the case. Instead, we now have  a greater understanding of the dog shake thanks to a study from Andrew Dickerson at the Georgia Institute of Technology in Atlanta.

Dickerson recorded video of dogs shaking their fur and measured the images to determine the period of oscillation of the dogs’ skin. For a labrador retriever, the result is 4.3 Hz.  Mathematical calculations determined that dogs needed to create enough centripetal force to exceed the surface tension that binds liquid to fur. Not scientific enough for you? Try an excerpt from MIT’s Technology Review

“This model leads to an interesting prediction. If the animal has a radius R, the shaking frequency must scale with R^0.5. That makes sense, smaller animals will need to oscillate faster to generate forces large enough to dry themselves.

To find out whether that applies in nature, Dickerson and pals studied films of various animals of different sizes. They found that a mouse shakes at 27 Hz, a cat at about 6 Hz while a bear shakes at 4Hz. “Shake frequencies asymptotically approach 4Hz as animals grow in size,” they conclude.

But taken together the best fit for this data is not R^0.5 as predicted. Instead the universal rule for shaken fur is that the frequency increases with R^0.75. 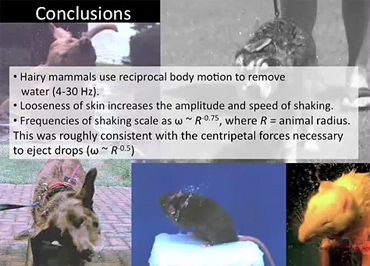 Clearly, their model misses some important correction factor. Dickerson and co make one suggestion. In their model, the radius is the distance from the centre of the animal to its skin. Perhaps the fur makes a difference, they say in a video intended for the 2010 APS Gallery of Fluid Motion.”

That video is below, and is really interesting to watch even though it lacks sound. An internet search also turned up a second video from Discovery featuring dogs shaking in slow motion, and I thought it entertaining enough to include.