This story comes from The Animal Rescue Site, which in addition to featuring fan-submitted rescue stories, offers a wide selection of clothing, décor, pet supplies, and other gifts.  For each purchase made, a food donation is made to shelter pets in need. 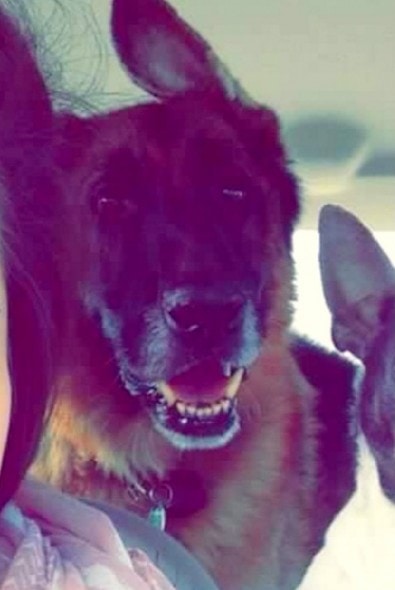 Over the years we chose our new family members by saying we wanted the one that has been at the shelter the longest and always ended up with amazing animals. In 2006 my dad decided he wanted a purebred German shepherd, them being his favorite dog, and he had one growing up. We went to a breeder six hours away and picked our puppy.

Over the years Charger had chosen me as his partner. We did everything together and he was one of my best supports as I was going through nursing school. He put up with me reading to him for hours, practicing my bandaging skills, sitting still while I recited the steps to inserting an IV and so much more. He never once had a problem with it.

Fast track to November of 2014. I had been through a very abusive relationship and had three suicide attempts. I was admitted to the hospital for three weeks and had to withdraw from the semester. My only reason for living was Charger. After my discharge from the hospital, it was a long road to recovery and getting back to school. Charger laid with me every day, even when I cried, and he came to every appointment with me in the city.

Charger began struggling and was diagnosed with degenerative myelopathy. Within a few weeks he lost all function with his back legs and we bought him a new wheelchair. Even with so many health issues I couldn’t find a more happy dog than him.

In the summer of 2015 I wrote my national exam for my nursing license. Within a couple days of receiving my letter that I passed, I laid with Charger while the vet helped him on his way to the rainbow bridge. I have never felt any love like I have for him. I recently had a realistic picture of my boy tattooed on my back in remembrance for all he did and how he saved my life. I could never repay him for all he has done.

I love you with all my heart, always have and always will.