I’ve been a cop for what feels like a long time, 24 years come June. If I’m honest, I have to admit policing can have certain effects -sometimes unsavory effects- on the human psyche. 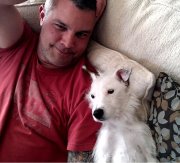 For example, police offers can get hardened emotionally over time and come off as lacking empathy for others. They can be a little arms length with people they don’t know, even in everyday social settings. They often develop what people outside the circle might call an inappropriate sense of humor (“gallows humor” – a coping mechanism really).

For me, control is a biggie. Gotta maintain. Control your emotions. Control your environment. Control potential suspects around you. Control your tactics and control your decision making process as you deploy resources during fluid, dynamic situations.

So it’s not a stretch to imagine my lack of enthusiasm for situations which leave me with little or no control. Flying is a good one. I’m sure the pilot’s going to fall asleep. I’m sure the bolts holding the wings on weren’t torqued to spec. I’m sure the foreign exchange student seated a row over is an Islamic jihadist hell bent on bringing the plane down.

Anyone who knows me knows about Boomer, our beloved 3-year-old terrier we rescued from a high-kill shelter before last Christmas. He’s a Parson Russell Terrier, a near genetic twin to the Jack Russell, albeit a longer legged variant of the breed so as to be able to run faster/farther when bolting fox from their den. Indeed, despite their diminutive size, Parsons are serious hunting dogs with very high prey drive.

Boomer gets daily exercise in the form of a long walk and plenty of tube sock tug-of-war and squeaky ball fetch inside the house. In exchange for providing him outlets for his Chernobyl level metabolism and energy, he’s an exemplary pet in every respect. He is a dedicated lap dog in the evening, curling up and relaxing in front of the television. If we’re not watching Southland or the Dog Whisperer, he’ll quietly direct his attention to a Nylabone. The point is, he’s a great dog… good with kids, friendly with other dogs, wheelbarrows of personality, playful when appropriate/calm when appropriate, etc. I can’t say enough.

Boomer does have one chink in his behavioral armor, however: cars.

I frankly don’t know how Boom survived on the street, because the Council Bluffs shelter picked him up as a stray. He goes ape-shit when encountering a car during his walk. This manifests itself in a high pitched scream (I call it his “war cry”) followed by head down, straining shoulders, sled dog style pulling on his leash that shocked me the first time I experienced it. This dog pulls like no other 16 pound animal I’ve ever known.  As soon as the car is gone, however, Boomer’s able to relax some and resume marking his territory and scratching around for bunny scent under trees and in shrubs.

Yesterday’s walk was like any other.  I had Boomer in his slip-collar and we were meandering along when a silver Toyota Tacoma came by.  I normally give Boomer a quick correction with the leash when he fixates on a car (I think he perceives these automobiles as fast moving prey, so you’ve got to be a confident pack leader to get him redirected). Predictably, Boomer lets out his war cry and commences to impersonate an Iditarod contestant.

That’s when it happened. I gave a pop to Boomer’s collar and…

…his leash went slack.  His collar had broken, and in that sickening slow motion moment, Boomer stretched out and took to the chase as if he were shot from a cannon.

In the interest of full disclosure, I’m not a runner by nature. An asthmatic standing 6’3″ and weighing 240 pounds, I’ve always gotten more favorable results punching you in the head than chasing after you willy nilly. Having said that, I was an athlete in high school and college and I can run when necessary. And right about now it was positively necessary.

I was adrenalized. I took off in pursuit, straining to sprint as hard as I possibly could. If Boomer was able to hear me, his innate instinct to chase overwhelmed him. I screamed and waved my arms hoping the driver of the Tacoma would see or hear me and stop. It didn’t work, and Boomer was gaining on that truck as the driver led him further and further away from me.

I began to outrun myself and tripped. In the blink of an eye, I tumbled hard onto the pavement in the middle of the street, barely breaking my fall with the palm of my left hand and barrel rolling twice before painfully dragging myself back to my feet to see this little white dog I love so much disappear over the crest of a hill three blocks away from me.

All I felt was doom.

No control, only despair.

I could feel my heart breaking.

Hands on my knees. Lungs burning. I’m on the verge of vomiting. I turned my head to see a woman in an SUV pulling up next to me. She was hurriedly clearing her passenger seat of her iPhone and purse and whatnot. Without hesitation, she called for me to get in and we took off in Boomer’s last direction. Now at least, I had a breath of hope.

God must be a dog lover, because Debbie Dotson’s actions are likely the only reason I ever saw Boomer again. As we crested a hill near a local elementary school, we spotted Boomer and the silver truck. The driver had finally stopped and Boomer was nipping at the truck’s front right tire. Somehow, he had avoided being run over and killed.

I leaped from Debbie’s vehicle and tackled Boomer in a muddy patch adjacent to the curb.  (I would later learn Andy and Emily Passo’s kids -all of whom are crazy about Boomer- witnessed the entire ordeal from their house and were crying, then cheering, as the event unfolded.)

After loading my scrappy son in Debbie’s car and picking up her charming 6-year-old daughter from the same school Boomer had run to (serendipity anyone?), we headed for home. While enroute, Debbie deftly explained to her girl how you should never give a strange man a ride unless he’s an asthmatic off-duty police officer who looks like he’s fallen down a flight of stairs while chasing his dog as if his life depended on it. Because I was. Because it did.

Once home, Boomer got a bath, Denise fixed me a stiff drink, and I took inventory of the carnage: road rash on my right knee and right hip, wrenched low back, bruised right shoulder, and my left wrist feels sprained. I’m coughing a lot too from having taxed my lungs in the cool air. To be blunt though, none of this matters a whole lot and I’d willingly take that fall five times in a row if it meant Boomer was spared injury or death.

This morning, I’m eternally grateful to a fellow human being, a citizen willing to expose herself to an unknown risk in picking up some guy she didn’t know and lending a helping hand. We’re headed to Charleston’s to get Debbie a $50 gift certificate so she and her husband can enjoy a night out on us. Fifty bucks to demonstrate a little gratitude for saving the life of pet we’re over the moon in love with is the least we can do, don’t you think?

Now, where’s that bottle of Tylenol?