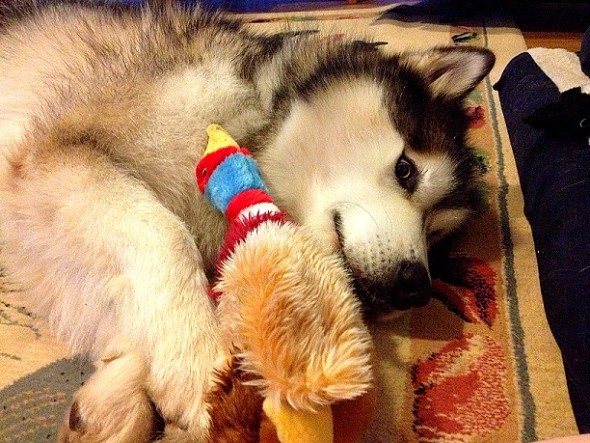 This comes from The Animal Rescue Site.  They feature fan-submitted rescue stories and merchandise – everything from clothing to pet supplies.  With each item purchased, food is donated to shelter pets in need.

In the early 90s, my wife and I had two dogs. When they passed, she pronounced her heart was broken and we would never have any more. Well, then we got another. He traveled around the world with us, eventually ending up in Australia. He too passed, and (again) my wife said she couldn’t stand the pain of losing another – he’d be the last.

Six months later, I find a web site on my computer screen. Front and center on the page was a picture of a 7-year-old Mal, Simba, that had been put up for adoption, and was currently in foster care about 800 miles from us. At least once a week I came home and Simba was on my screen. She didn’t want him of course, she just thought he was cute! Four months later, I was still coming home to see Simba on my screen.

“Do you want me to ring them?” I asked. “Sure, he’s probably gone anyway,” she said. It turned out he had been in other foster homes, had been adopted then returned, his life threatened, basically been without a forever home for quite a while. He had some average medical issues, but nothing life threatening, and he was the cutest thing you had ever seen – how could someone give him up, and how could anyone else not want him? The people looking after him were doing a great job, and would have kept him if they could (they already had several rescue puppies, and a baby on the way).

My wife said she knew what she wanted for her birthday…. him!

When I saw him I knew he was coming home with me. For the first few months he was a bit shy, and I thought we would never click. Now, he is a typical Mal – talks when he wants to eat, talks when he want to walk, and importantly, whenever my wife or I come home, he talks even louder to tell us how much he missed us and how happy he is we are home.