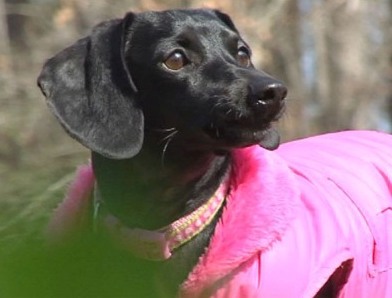 An elderly woman from Slaughter, LA is making headlines for saving her pet dachshund from a hungry hawk.

“He’s been in the trees and around our property,” said Pat Bringol, the dog’s owner. “He’s been around the neighborhood. Our neighbors have seen him. He’s even been on our carport. And, that’s…scary.”

Bringol’s powers of observation paid off last week when she let Hannah Marie out for an afternoon bathroom break. Within moments a dark shadow swept over the dog, and Bringol looked up to see the hawk struggling to fly off with the 10 pound dog in its talons. She immediately gave chase.

“I had to reach on my tippy-toes and grab her hind legs. And, it took everything I had to pull her. I said, ‘You’re not getting my dog!’ I was so mad I was shaking,” she explained.

She was able to wrestle Hannah from the predator’s clutches, but not before the dog’s favorite jacket took a beating. It now bears the scars of a very close call – three large gashes that remind the ever vigilant Bringol to keep a cautious eye on the sky.