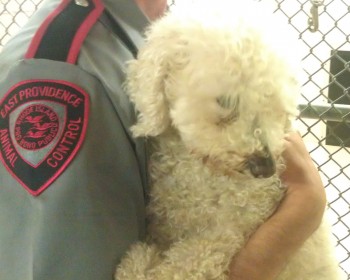 It’s unbelievable, and yet it actually happened.  On September 20th, a small Bichon Poodle mix was hit by a car going 50 mph, and survived.  But the really amazing part of the story is that the dog was caught in the grill of the car and travelled there for 11 miles before the driver realized what had happened.  It all happened on Route 44 between Taunton, Mass. and East Providence, R.I.

After braking to avoid her the driver of the car didn’t see a dog on the road, so assumed he had missed her, and continued on to East Providence where another driver alerted him to a problem with his grill.    Stunned, the driver immediately went to the police station where staff from East Providence Animal Control Center were brought in to extract the poor pup from the car.  “It was difficult to get her out of there,” Officer Muggle, EPACC supervisor, said. “Not only because of how she was stuck in there, but because she was grabbing on pretty tight.”  She was then taken to nearby East Bay Animal Hospital for treatment, and then on to Bay State Animal Hospital.

Incredibly, hospital staff said that other than a nasty concussion, a small cut above an eye and a slight tear in her intestine, the 5-7 year old pup was okay. “The driver of the car was pretty shaken up about the whole thing,” Officer Muggle added. “He was very upset about it. He came back the next day to check on her to make sure she was alright.” 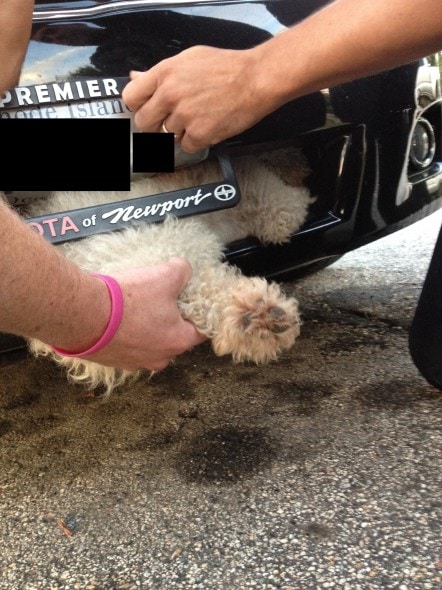 Now the fortunate dog is doing well in the care of Animal Control and the search is on to find her family. She was wearing a collar but no tags and a microchip led to a dead end in Kentucky.  If her family is not found she will eventually be put up for adoption.  Anyone with information about the dog’s owner or who may want to adopt her at some point can contact the EPACC at 401-435-7675 or 401-435-7676.