Rescue workers save lab from drowning in chilly water 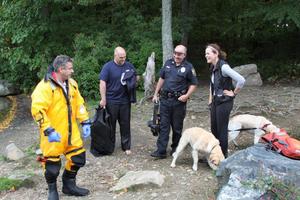 Labs love to swim, and sometimes they just don’t know when to stop.  For Holly, a yellow lab who chased leaves into the reservoir in Ashland MA, that almost cost her her life. Holly was out for a walk with her dog walker, Marsha Birtwistle when she had this misadventure which caused Birtwistle to frantically call the fire department for help.  “I was having a slight panic attack,” said Birtwistle, who resisted the urge to jump into the cold water.

Holly was swimming in circles about 100 yards from shore, and losing steam when Lt. David Iarussi arrived wearing a Mustang Survival Suit.  He sped toward Holly in a rescue boat, and meanwhile 2 police officers arrived on scene.   After trying to coax to Holly to shore with sticks, officer David Muri decided to jump in after her. “The dog just kept swimming in circles and was getting slower and slower,” Iarussi said.

Eventually Iarussi and Muri were able to lead Holly back to shore, but she would not allow them to pick her up so she swam in under her own power.  It was a wonderful display of teamwork by all who were involved in this heroic rescue.  All of this happened around 11:00 am on property owned by Northeastern University.

After returning Holly to her grateful owner, Birtwistle received an email from the dog, apologizing for causing such a fuss.  It seems likely that though everything ended well, Holly will not be allowed to roam free near the reservoir anytime soon.