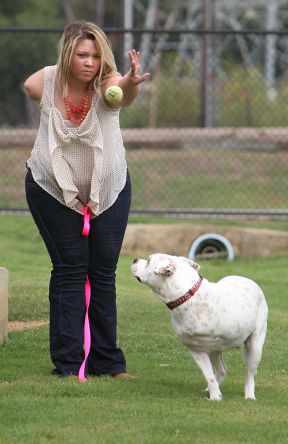 Kacee Pavelka can’t imagine life without her rescue dog Hank. The two both are missing a limb and that shared experience has created a special bond between the two.

Hank (previously called Carlos) was saved by Corridor Rescue, a group that concentrates its rescue efforts on a notorious area near Highway 59 in Houston where dogs are dumped known as the “Corridor of Cruelty.”

After Hank was rescued it was discovered he had cancer in one of his legs, amputation was the only option.

Meanwhile Kacee was trying to find someone who could relate to her.  In 2011 she lost her right arm in a car accident. She was often gawked at and asked a lot of questions about her missing arm. She began searching on Petfinder to find a dog when she spotted a picture of Hank.

“There was just something about him,” said Kacee.

When the two met Kacee knew Hank was the one. Soon the two began bonding in a unique way.

“Our very first bonding experience was when we were sitting next to each other on the floor,” said Kacee. “I was trying to get close with him, and he looks over and he starts looking where my arm would be. You know, so then I started rubbing where his arm would be, and that’s when we both knew we had a similarity with each other.”