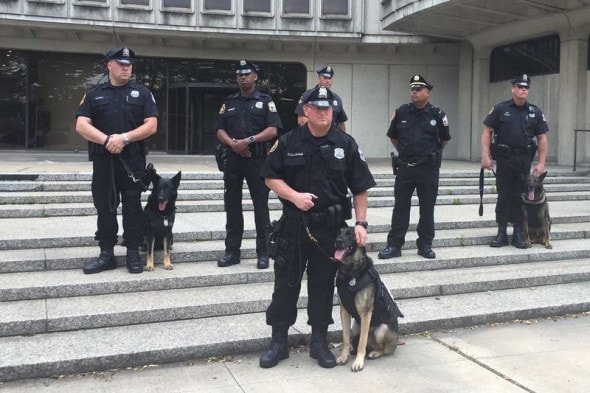 A woman has made a $22,000 donation to the Philadelphia Police Department, all to go towards getting bulletproof vests for the police dogs on duty.  Joanne Berwind made the donation and the announcement was made yesterday at a news conference which took place at police headquarters.

At the announcement, Police Commissioner Richard Ross thanked Berwind for her generosity, and acknowledged a greater need for protection for these brave dogs.

“They would give their lives for their partners,” said Ross.  “And they are loyal to this department.”

According to Berwind, this goes much deeper than just a love for dogs.  She says that she was motivated to make the donation after reading about a police K9 that was killed in the line of duty in Virginia, and after taking a tour of the K9 unit facilities.

“It was obvious these officers feel the same way about their canines as I do” said Berwind.

All of the 23 dog in the department were measured and fitted for a custom bulletproof vest.  They run about $900 each, and do more than just stop bullets.  They’ll also protect the dogs from anyone trying to stab at them as well, and should last about five years each.

The vests are on their way, and the K9 officers will start wearing them as soon as received.  They’ll hopefully be all in and handed out before the Democratic National Convention next month.