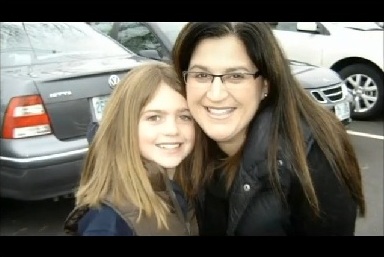 Bears, take a note: you’re not the only ones who are protective of your cubs! A New Hampshire woman fended off a 300-pound black bear after it attacked one of her dogs.

Lisa Webb and her daughter Kennedy were inside their Edelweiss cabin in Madison when they heard a commotion.

“All of a sudden the dogs started going crazy but it was a different crazy then they normally go when they see something outside,” Lisa said.

They saw a black bear on the deck, and yellow Lab Ozzy and black Lab Boo bolted outside.

“They got out and they were on the deck and my daughter was standing there and the bear had just walked by here with the open door,” Lisa explained.

At first, it seemed the bear was going to retreat. 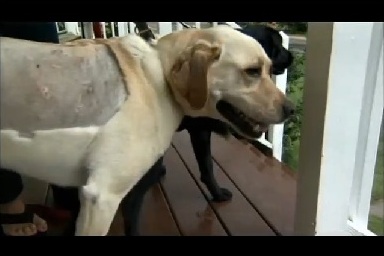 “My yellow lab started coming towards me and all of a sudden stopped and when I looked, it was because the bear had come back and was right there, within inches of me,” she continued.

“And I took the baby gate and I hit the bear in the head with the baby gate, dropped it, and ran into the house.”

Once inside the cabin, Lisa realized that Ozzy had been hurt. He sustained a dozen puncture wounds during the battle, and one of he back legs was weakened. He has been to the vet for surgery and is now recovering.

Some say that Lisa shouldn’t have risked her life for a dog, but she knows better.

“I didn’t think twice about it, they’re part of your family,” she said. “I know it’s just a dog but…I would do it all over again.”

“Get larger than you are, raise your arms up, clap, yell at the bear, and back away slowly.”

But this advice is for black bears – don’t try it on a grizzly!