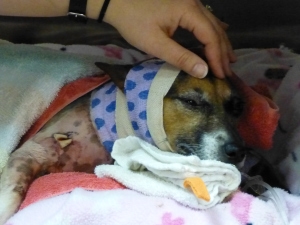 Staff at a Garden City rescue group are calling a case of animal abuse one of the worst they’ve ever seen: a rat terrier was abandoned after being stabbed and partially skinned.

Detroit resident Timothy Williams, who lives across from Patton Park, found her on his front porch. He wrapped her in a towel and had someone call the police.

“It was literally cut from shoulder to shoulder around. It was a perfect cut,” Williams said. “She was in shock. She was shivering.”

Providing for Paws then took her in and saw that she receive treatment at Emergency Veterinary Hospital of Ann Arbor. The 10-pound dog had been skinned from the nape of her neck up to her ears, and had been stabbed several times in the side. Fortunately, no internal organs were punctured.

“Her skin is hanging off the side her body and is clean-cut from the back of her neck to her ears. This was not an accident. The cuts are perfect and deliberate,” said Providing for Paws president and founder Joanne Dixon. “We don’t understand who would do this or why. And any leads we can get to whoever did this, we are going to be offering a reward of $1,000 at this point.”

She believes the dog, whom they are calling Patty, belongs to someone – possibly even a little girl.

“Her toenails are painted pink, so we’re pretty sure that she was owned,” Dixon said. “Maybe she got loose from her yard, or somebody possibly stole her, and we believe that there is an owner probably looking for her.”

When news broke in the about Patty’s intentional torture, Detroiters rallied. A YouCaring fundraiser was started to cover medical costs, and people went above and beyond to help. The goal was set at $5,000, but over $20,000 has flooded in by compassionate and generous individuals who want to see Patty thrive.

Though Patty underwent five hours of surgery, vets will not be able to reattach her fur. However, she is recovering and is in stable condition.

Anyone who knows who Patty belongs to or who mutilated her should call Providing for Paws at 734-765-8989.

The photos of Patty are very graphic, and heeding advice from fans who wish not to be presented with such horrible images, we have opted not to show them here, but to redirect those brave enough to look to the photo page on Providing for Paws’ Facebook page, found by clicking here.