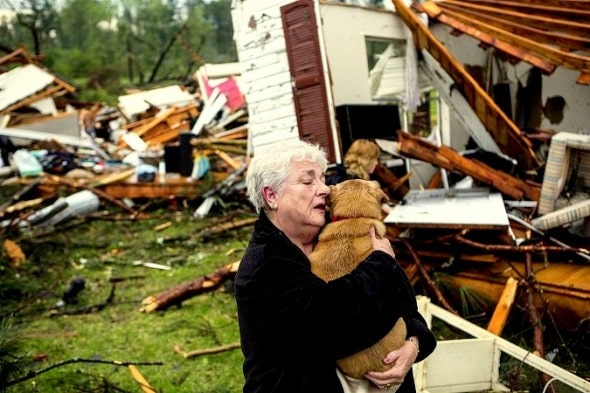 As residents in the Deep South hunkered down in preparation for the deadly tornadoes set to strike over the weekend, others, like Constance Lambert, who were out of town, could only worry and pray they could get home in time to reach their pets.  She was overjoyed to find her dog alive amongst the wreckage and devastation.

“When I felt the pressure in my ears, I knew it was real,” said Annette Reed of Tupelo, Mississippi. “I knew we had to get to safety.”

They took shelter in their home, and though their property was badly damaged, they all survived.

“The kids were in the basement bathroom with foam over their heads and when a tree crashed through the bathroom window, I got in there too,” said Scott Reed.

Constance was away at an event when the tornado touched down in her area.  After reports of the touchdown hit news sources everywhere, she left the event immediately to rush home to check on her pets.

She was on pins and needles the entire way home, worried she wouldn’t see her dog alive again.  When she made it back to the wreckage that was her home, she breathed an overwhelming sigh of relief to find him alive.

Luckily, he survived the storm and was seen nosing around the tornado-ravaged homes that made up her neighborhood.