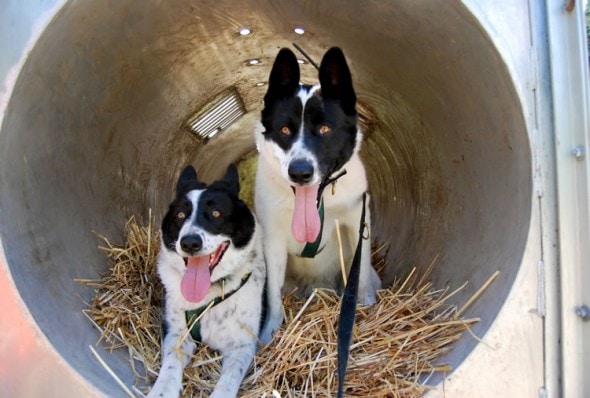 The Karelian Bear Dogs program in the state of Washington have become a critical part of wildlife management. The program almost went bankrupt when one of its dogs, Indy, needed life-saving surgery this summer. One woman recognized the importance of the program and raised money to save Indy and the program.

This summer Indy’s handler, Officer Dave Jones, took Indy to the vet where it was discovered he had a blocked intestine. “When the veterinarian cut him open, there was a suction cup in the small intestine and a string from a baseball that my kids have at home that got torn to pieces. And that was in there, just working its way back and forth.” The surgery to save Indy’s life cost $13,000.

The Karelian Dog program is part of the Washington Department of Fish and Wildlife and is funded solely on donations. The cost of Indy’s surgery was going to leave the program bankrupt. The program is a valuable resource that uses the rare breed of Karelian Bear dogs to help protect people and wildlife from each other. The Karelian Bear dog specializes in hunting animals like bears and moose. Their natural instincts make them ideal for handling the bears and other wildlife in Washington.

Recently two dogs in the program, Mishka and Spencer, used their powerful sense of smell to track hidden evidence in an elk poaching case leading to arrests. The primary purpose of the program is to help resolve the many bear-human conflicts that occur in Washington. The dogs teach bears to stay away from people. This allows officers to release a problem bear instead of putting it down. “It would be a huge loss to the state,” said Captain Bill Hebner. “And frankly, we wouldn’t be as effective as we are now, and more bear and cougar would have to be lethally removed.” The program also educates the public about wildlife.

Denise Stringfellow recognized how important the program is to her community and stepped up to help raise funds to save it. Her Riverdog Canine Coaching raised more than $3,000 to donate to the program. On Tuesday the Karelian Dog Team gathered to thank her for her efforts. “You guys are doing it right,” she told them. “And we’re proud of all the work you do in our community and are very grateful.”

You can learn more about the Karelian Bear Dog Program at their website. Donations can be sent to the program at the following address: