A nine-year-old Neapolitan (Italian) Mastiff named Mason died early on Thanksgiving in a New Hampshire house fire that also claimed the life of the family cat.  But Mason did not perish in vain.  Before the much-loved dog succumbed to smoke inhalation, she woke the house occupants, Charles Boudakian and Rhonda LaFleur, and alerted them to the fire.

They immediately tried to extinguish the fire, but called 911 when they could not stop the flames from spreading.  A wood stove may have been the cause.

“We’re all pretty heartbroken,” said Charles’ daughter Brooke, who chose Mason out of a litter of 13 puppies in 2003.

“I remember sitting on the ground and the lady letting all the puppies out and none of them came to me except for Mason,” Brooke remembered fondly.  “She was the runt of the litter and waddled up to me and sat in my lap.  I had to have her!” 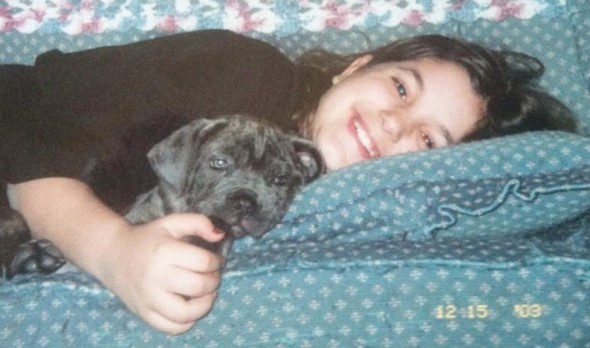 Special oxygen masks for animals were donated to the fire department by O2 Fur Life.  Mason was found lying side-by-side with the Boudakians’ cat.

“The animals were given oxygen and first aid on the front lawn, unfortunately both animals did not survive,” District Fire Chief Michael Gamache said.  “The pet dog who perished was credited with awakening the occupants of the home, in essence saving their lives.”

As Brooke’s first dog, Mason will always hold a special place in her heart.

“She was an awesome dog.  She was very protective, and she saved my dad’s life,” Brooke said.  “She was very loved.  It was a pretty heroic thing that she did.”