Shawna Harch didn’t plan on becoming a hero on Friday, but that’s exactly what she did.  It was about 90 degrees outside when she a dog in a black Mercedes barking in distress.  She tried other avenues, but eventually was forced to smash one of the windows with her car jack.  But it wouldn’t break….

The Portland, Oregon woman was meeting some friends and family for drinks on the evening of the 23rd and had just parked on a metered street when she heard a tiny dog barking frantically.  She walked towards the noise and saw the pup in a small crate in the back of a Mercedes.  All of the windows were rolled up, and the sun roof was cracked open about an inch.

The parking slip was time stamped from 4:47 till 6:47.  It was just about 5, so the owner might not return before it was too late to save the dog.  Shawna called Multnomah County Animal Services, who directed her to call the nonemergency police line.  But it would take them too long to arrive, and she knew the dog wouldn’t survive much longer.

“By this point, a passerby named Suzanne had stopped to ask what was going on. My sister, Lia, had also arrived. The three of us began going around to every business in the immediate area, asking if anyone owned the vehicle,” Shawna explained on her blog page.

“Everyone said no. At that point, a waitress from Caffe Allora came out and informed us that she’d noticed the owners of the car enter a big apartment building next door. I knew there was no way I’d be able to locate them in time, even if I could find a way to get into the building.”

As the minutes raced by, the situation grew more dire.  The dog had stopped barking, and was now slumped against the side of the crate, panting hard.  Shawna had been a communications and PR specialist for an emergency animal hospital, and had seen dogs with heatstroke.  But she had never been in this predicament before. 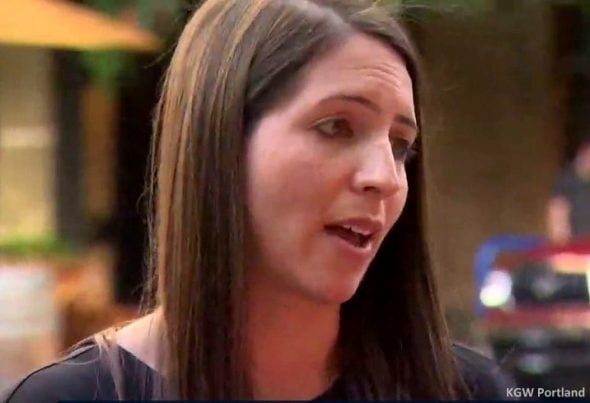 “I desperately tried to set off the car alarm, in the hopes that the owners would hear it and come outside. I shook the car and hit it with my hands, feeling like a crazy person. No luck.”

According to Suzanne, a law had just been passed the day before allowing good Samaritans to break windows to save dogs from hot cars without having to worry about getting in trouble.  Shawna remembered that she had a small jack in her trunk.

“I grabbed it, my fists clenched and heart racing. I’d never damaged anyone’s property, and I certainly don’t like making a scene,” she said.  “I’m an introvert, and this was way outside of my comfort zone. I clenched my teeth and swung the car jack like a baseball bat as hard as I could.”

But the window didn’t break.  It didn’t even crack.  She hit it again, harder this time, but still nothing.

“I began to feel the tears building up. I was trying with all my might to get to this poor dog, but I couldn’t physically break the window. My hands were bleeding and I was beginning to fear the worst.”

She saw two men approaching, and asked if they knew how to break the window.  They didn’t, but a minute later, three men pulled up, and one of them offered to let her use his stainless steel water bottle.  She held up the jack, and hurled it squarely at the center of the window.

Shawna struck the corner, and this time the glass cracked.  She broke through it, unlocked the door, and pulled the crate out.

“The crew at Caffe Allora had brought over a big tub of water to help cool the animal.  After we tended to the dog, Suzanne began sweeping the glass and I went to clean myself up.  During all this commotion, another concerned passerby named Mary Ann had stopped to be a second witness, in case I needed support when the police arrived.”

Officers arrived just then, and Shawna showed them where the dog was.  As they checked it out and took down information from the heroine, two young men, about 18, emerged from the apartment building.  They were dumbfounded by the scene before them, seemingly unaware that having the moon roof cracked was inadequate.  Shawna and the police explained that it wasn’t, and the car owner thanked her for saving the dog.

It seems preposterous that so many people are oblivious to how quickly a life can perish inside of a hot vehicle (have these people never gotten into a car on a hot day and immediately rolled down the windows and blasted the ac??), but sadly, this sort of thing happens all the time, and the outcome is usually not this positive.

“In circumstances like these, inaction is unacceptable. The craziest thing we can do is nothing. Speak up. Act swiftly and responsibly,” Shawna said.  “In Oregon (and some other states), you have the law on your side. But more importantly, it’s the right thing to do.” 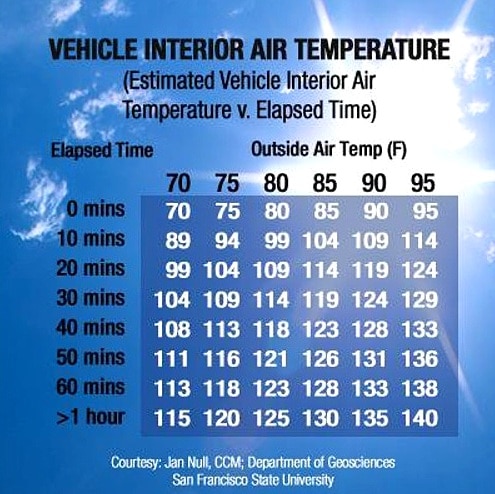