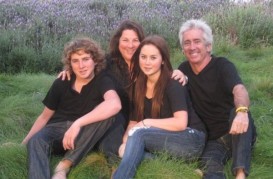 A California woman died tragically Sunday in a freak accident after saving a stray dog from traffic.

Orange County Sheriff’s Department reports that Mara Steves, 48, was walking with her son when they spotted a dog running in traffic at a busy intersection. She managed to catch the dog and was kneeling with it on the sidewalk when two cars collided nearby. One of the vehicles ran onto the sidewalk, striking the jogger. She was declared dead at the scene.

Her son was uninjured, and witnesses saw the dog fleeing the scene of the accident. Both drivers and a passenger suffered minor injuries in the crash. All three were transported to a local hospital.