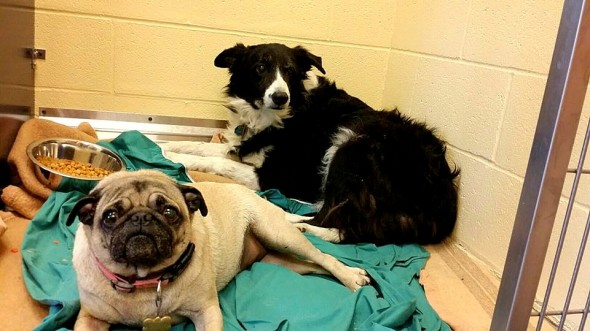 Two dogs have survived an explosion that leveled a home in Independence, Missouri on Tuesday.  A Border Collie was blasted out onto the lawn, but a pug remained trapped, and heroic neighbor Monica Ayers dug through the smoldering rubble unto she unearthed the surviving dog.

“It was a total shock.  I don’t know what made me dig through all that rubble,” Ayers said.  “Just if it was me and my family, I’d pray for someone to help us out.  I’d want somebody to come in there and look for us.”

Jim Dorsey said he and his wife had just left home to take their son to an appointment.  Suddenly there was an explosion, caused by a natural gas leak.

“The first dog was lying about right here in front,” Ayers said, pointing to the yard.  “The pug was inside.”

She dashed over to the wreckage, calling out to survivors while moving demolished furniture out of her way.

“I was screaming, ‘Hello!  Is anybody there?  Can anybody hear me?’”

Then came a dog’s whimper.

“He was right up underneath the couch,” Ayers explained.  “I kind of grabbed him and pulled him out.”

She brought her home and gave her water.  The terrified Collie had run off, but was soon caught.  Both are now recovering at the Great Plains SPCA. 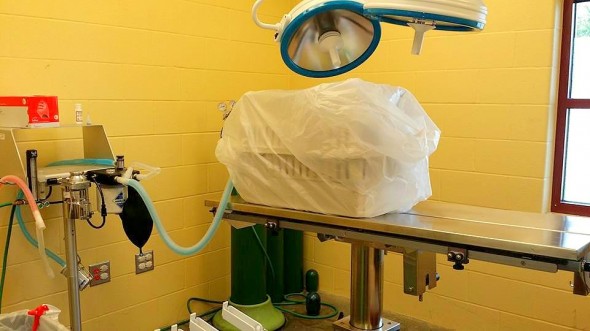 “Today there was a massive house explosion in Independence, MO. Two dogs (a pug and a border collie) were found in the neighbor’s yard, thrown from the explosion. They are now in our care, sitting in kennels that have been converted into oxygen tanks. Their hair is singed and they have a few scrapes on them, but so far they are doing okay,” reads the caption for a photo on Great Plains SPCA’s Facebook page.

“The family’s other pets [two dogs and three cats] are missing and sadly are presumed dead. We do not have many details right now, but we will update everyone here as we learn more. Our hearts are with this family, and we ask that you keep them in your thoughts.”

An update from earlier today:

“Molly [the pug] and Bandit [the Border Collie] are doing well at our Independence Campus after being blown from their house yesterday in a gas explosion. Many have asked us how they can help the Dorsey family, who not only lost two dogs and three cats in the explosion, but all of their personal belongings.

“We will be collecting Wal-Mart and Target gift cards, as well as restaurant gift cards for the Dorseys to help them get back on their feet. You can drop gift cards off or mail them to our Independence Campus.”

If you would like to help the Dorsey family, click here, or mail gift cards to the SPCA at: