Shelter workers at the Humane Society of South Mississippi watched anxiously as tears of joy streamed down Danielle Weatherford’s face: after four long, painful years, her cherished dog was on his way home.

It was a moment long in the making and well worth the wait – when he saw her again for the first time, Peanut leapt into the waiting open arms of Weatherford and kissed away her tears. 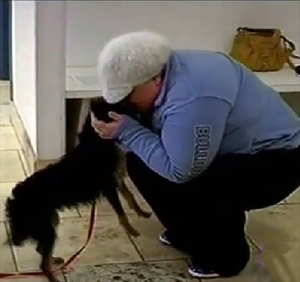 “There’s no emotion describable to it,” Weatherford said. “I never thought it was going to happen again.”

Peanut was a Christmas gift, given to Weatherford in 2006. She says she fell madly in love with her scruffy bundle of joy, and was devastated when he wandered away from her aunt’s house two years later. Scrambling to find him, Weatherford and her family searched the area extensively, but Peanut had vanished without a trace.

“I loved him. I haven’t had another pet since Peanut. He had my heart. He was so ugly, I loved him,” Weatherford said embracing him in her arms.

Peanut was found on O’Neal Road in Gulfport last Monday, 30 miles from his old home, and was identified via a microchip scan. Because of the distance, the animal control officer assumed something in the microchip’s data was flawed, but called the number anyway. Danielle’s mother called the Humane Society a few days later and verified ownership.

“‘Oh my gosh, you have Peanut! I can’t believe it’s Peanut. What does peanut look like?’ Szczechowski said, recounting the conversation. “They couldn’t believe it was Peanut.”

After confirming that it was in fact Peanut, her mother called to share the news. Weatherford was blown away.

Krystyna Szczechowski said the reunion, long in the making, was the strongest possible argument she could make for microchipping.

“You can talk about microchiping, you can talk about proper pet ID, but to actually see it work, and see it in person,” Szczechowski said. “He went directly to her. There was no doubt in his mind who his momma was, and it just warms my heart.”

Weatherford said she is so grateful to have Peanut back in her arms that she’ll never risk losing him again. She thanked his rescuers through her tears. When asked what she planned to do next, she said it was time to take Peanut home and smother him with four years worth of affection.

“Snuggle with him, pet him some more, probably keep crying,” Weatherford said.