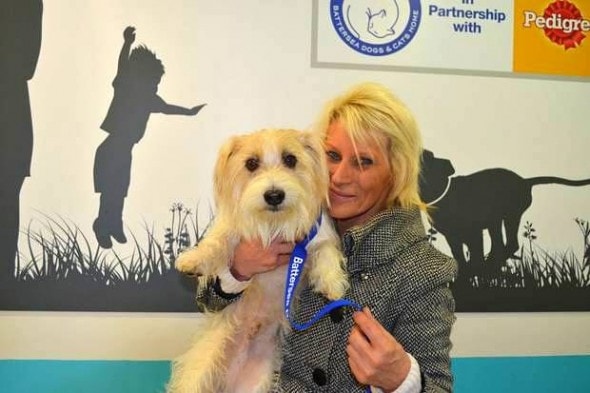 A UK woman has just had a joyous reunion with her beloved boy Alfie, who was sold online two years ago by her ex-boyfriend.  She didn’t believe she’d ever see her Jack Russell mix again, but now has him back thanks to his microchip.

“He’s such a wonderful dog and it is heaven having him back. I feel like I’ve won the lottery,” Susan Skinner said.

The Romford resident received the phone call of a lifetime when she was contacted by the Battersea Dogs and Cats Home, informing her that they had her five-year-old dog, Alfie.  He had been bought online by a couple in Essex who was forced to give him up due to a move.

“The whole family is over the moon and I am so grateful to all Battersea for reuniting him with his family,” Susan said.  “When I got the phone call from Battersea I was shocked, I couldn’t speak, it was one of those moments that didn’t feel real.”

They brought Alfie to Battersea, who checked his microchip.  The couple never had it updated with their information, so Susan’s information was still listed.

Susan’s family was crushed when Alfie was sold, and the ex refused to tell them where he ended up.

“If it hadn’t been for his microchip I would never have seen my little man again,” she said.  “He was chipped when he was a puppy, but I didn’t realize how important it would be. I can’t understand why people wouldn’t get their pets microchipped.”

Liz McWalter, head of intake at Battersea, said, “What an incredible reunion after two years of Alfie being separated from his owners.  It really does highlight the importance of microchipping your pet.

“Battersea offers free microchipping for dog owners at our three centers in London, Kent, and Old Windsor, and if you haven’t already got your dog chipped we’d urge you to take this simple step to ensure you can be reunited with your pet should you get parted.”