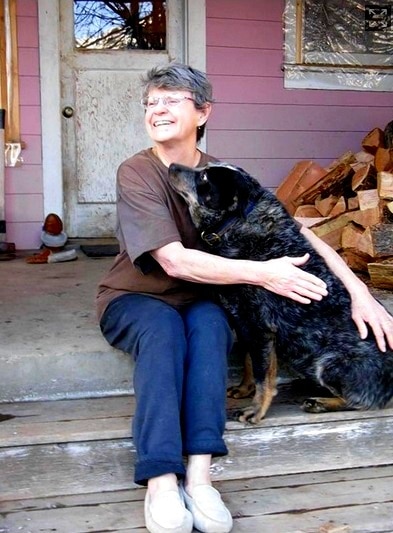 Judy Camp just did the right thing:  in December she saw a dog chained to a rotting flatbed trailer in the freezing cold, and she saved his life.  But because what she did is technically a crime, she might be facing up to three years in prison.

Camp found out about the suffering dog through a media site and within hours, had driven to the Washington state address.  She saw a tubby, nearly blind dog chained up to a trailer next to a frozen water bowl.  That night the temperatures were going to be below zero and with a bitterly cold wind chill.

“I did nothing wrong,” she explained. “I did everything right.”

Camp freed the dog from his chain, called him Tank, and took him home.  Not long afterward, the neglected dog was surprisingly reported stolen.

She brought the blue heeler to a vet’s office, where she was met by an Okanogan sheriff’s deputy.  She claimed the dog was hers, and while animal control officer Dave Yarnell collected records from the vet, Camp fled.

She was arrested in the parking lot, given a citation for theft of pet and released her. Later that day Camp called up the owners of Tank – whose real name is Duke – and offered to pay them $500 for the six-year-old dog.  The Magruder family accepted, but she still faces charges.

She brought the dog back to the vet for an additional check-up for his obesity, arthritis, and red, runny eyes.  The last time he had been to a vet was when he was a puppy.  In the meantime he had suffered damage to his scrotum, either from a botched home neutering job or from having been frozen to the ground or trailer. 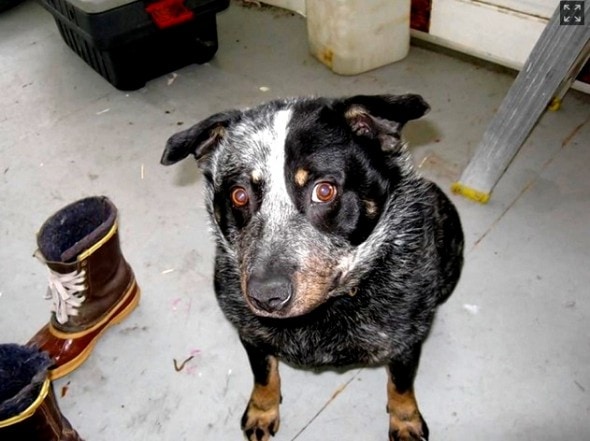 It has been reported by neighbors that the Magruders have a history of animal abuse and neglect, but because it’s not illegal for dogs to spend their entire lives on a four-foot chain in freezing temperatures in Washington state, nothing has been done to protect them.

Despite now being a proper, loving owner to Tank, Camp still had to go to court today for the charges of theft and obstruction.  She faces three years in prison, but the verdict did not come back yet.

Tank is adjusting well in his new home with his two canine siblings.  He still plunges his nose into his water dish before drinking to make sure it isn’t frozen, but he happily comes when he’s called for treats.

“Yes, I could have taken a plea bargain, but that would have been a lie,” Camp said. “I did the right thing for the right reason.”