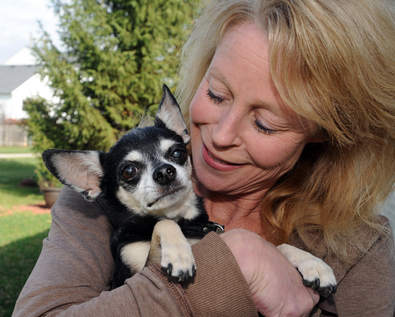 Dawn McCarty went out to get her newspaper Thursday morning in front of her Antioch, Illinois home. As she was walking to get the paper she heard her Chihuahua Tucker in distress. She quickly ran to the backyard and found a coyote had Tucker by one of his tiny legs. She quickly shooed the coyote away with her newspaper saving Tucker.

Tucker is 12-years-old, suffers from diabetes and is blind. He has survived a brain tumor, and he can now add coyote attack to the impressive list of things he has survived.  McCarty got up at around 5 am and took Tucker out in the back yard. She hooked him to his leash and headed to the front yard to get the newspaper. “All of the sudden, I hear him yelping, so I ran around to the back and there was this coyote who had him by the back leg,” McCarty said.

McCarty was scared but quickly went into action to try to save Tucker. “I took my newspaper and kind of held it out like a sword, and I shooed it away,” she said. She also noticed a second coyote standing only a few feet away from the scene. “They were big – bigger than a German shepherd. They both took off when I started yelling and swinging the paper,” McCarty said.

Tucker sustained cuts to his leg from the attack, but the veterinarian says he is expected to be fine. Reports of coyotes in urban areas especially near Chicago has been on the rise. Tucker’s attack is one of several reported in the Chicago area recently. “I just want my neighbors to be aware that this happened. If he wasn’t on a leash, he would have been gone. I think the leash saved him,” McCarty said.