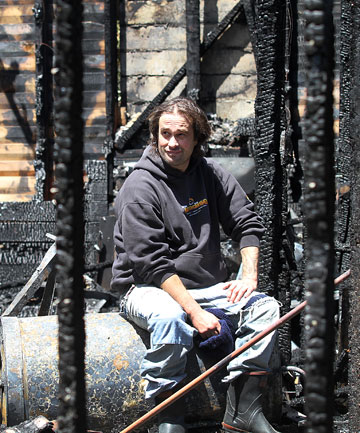 Benji Farrell was in his yard Saturday evening when the house he rents in Rahotu, New Zealand burst into flames. He quickly ran into the burning house to save his dogs. Farrell and his dogs narrowly escaped as the burning home started to collapse around them.

Farrell found his one dog Judah initially, but was unable to find his pit bull Bubba. He went running back into the burning house to get Bubba. “Flames were all over the place, all over the walls and all over the ceiling,” Farrell said. He found Bubba and ran out of the home just in time. “I was running down the path with my dogs and the windows were exploding over my head,” Farrell said.

Farrell and both his dogs made it safely out of the house and then watched as it burned to the ground. When firefighters arrived the house was beyond saving. It took 20 firefighters over 2 hours to put the fire out. Firefighters believe the fire was started by a burning log rolling out of the fireplace.

Farrell lost all his belongings and is uninsured, “I don’t even have a pair of socks.” He is very happy he managed to save his dogs, “They’re like your little kids, it’s like trying to save your kids running back in there,” he said. “I had to do it, eh bro.” Firefighters told Farrell that he was seconds away from death when he escaped with his dogs. Both dogs are stressed, but are otherwise doing well.