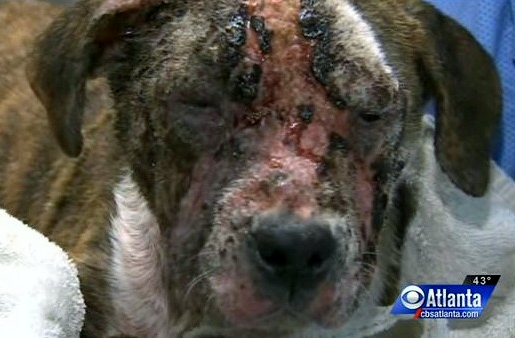 A volunteer for Angels Among Us Pet Rescue truly is an angel for rescuing a neglected puppy just hours before he was scheduled to be put down.  Sandy Springs, Georgia resident Melissa De Feis saved the Staffordshire terrier mix, named Harding, who is suffering from ailments unknown.

“It is hard to say what exactly is going on with him,” said Dr. Chris Piscitelli of Georgia Veterinary Specialists.  “His issues could range from immune disease, to potentially cancer, to a wound that needs to be treated over time; a chemical burn is a possibility.  We are hoping for the best for this dog.  But, he does have a long road to recover.  The hope is he does have a disease that is treatable and responds well.”

Harding was taken to the Dekalb County Animal Shelter on Wednesday.  There is no information on his owner or how he got in the state he’s in, but it is clear that there was neglect and that the puppy has been suffering for far too long. 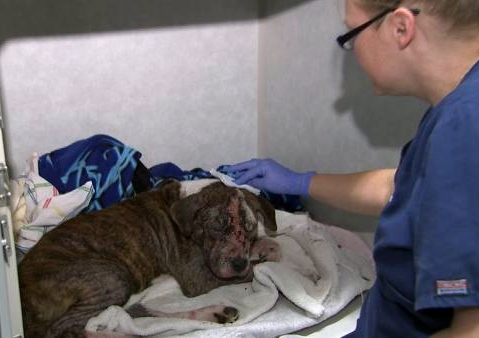 “He was within hours of being euthanized, he was in a lot of pain and it wouldn’t be fair for the shelter to keep him longer than a day,” De Feis said.  “He is a puppy, and he hasn’t lived his life and he has already suffered so much, potentially at the hands of someone.  At the very minimum he has been neglected, if he hasn’t been chemically burned.  And I thought he deserved a second chance at life, and to know that not all humans are bad.”

Harding will be kept at the animal hospital until at least Sunday, quarantined until it has been determined that he is not contagious.  His vision will be checked, biopsies performed and his skin will be inspected by a dermatologist.  He is already looking better since he has been given a medicated bath and antibiotics.