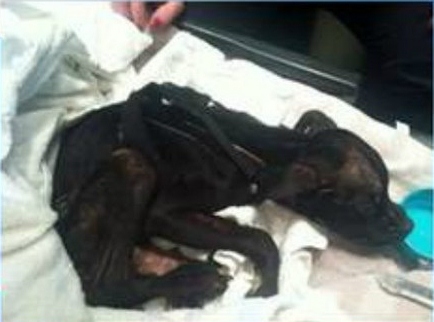 From the City of Good neighbors comes another disturbing tale of animal abuse and neglect.  A starving pit bull was left to die in frigid temperatures outside of a Buffalo animal shelter that was closed for the day.  But through this sadness, a ray of hope shines.

Two paramedics happened to drive past Dr. Hector Anderson’s Inner City Animal Hospital when they noticed a malnourished and frozen pup who seemed to be abandoned on the doorstep.

“As my partner was pulling into the driveway, all of a sudden, she started going, ‘Oh my God! Oh my God!’ It was, like, 32 degrees outside, and she was skin and bones,” said EMT Norine Hoch.  “If we [had gotten there] seconds later, she would probably would have been frozen to death.”

The pair knocked on the hospital door, but were only greeted by a custodian who told them they were closed and there were no doctors on site.

“A gentleman came to the door, and he said, ‘I know she’s there.  I called the SPCA.  They’re on their way.’  And slammed the door in our face,” Hoch said.

Shocked that he would not even bring the dog inside to warm up, the paramedics took matters into their own hands. The women wrapped the six-month-old dog, who was so weak she couldn’t even lift her head, in blankets and applied heat packs to her frigid body.  Then they rushed her to the SPCA.

Field supervisor Michael Arquette said, “It was very heartbreaking to see just how thin, weak, and how cold she was to the touch.  They were very saddened, but very happy to see us bring the puppy in, instead of just leaving it there.”

The puppy, who is now being called Metro after the Metro-Rural EMTs who saved her life, had her body temperature measured by the SPCA upon arrival.  It registered a shocking 10 degrees lower than would have been normal.

Sadly, this is not the first time a dog close to death’s door has been turned away by Dr. Anderson’s clinic.  In 2009, a cocker spaniel named Kenny was left to die on his doorstep for 24 hours before anyone even called the SPCA.  The gaunt dog weighed only nine pounds, and should have weighed 30.  The SPCA is now investigating the animal hospital because of the deplorable pattern that seems to be emerging.

Metro is in critical condition, but seems to be slowly recovering.

“She’s eating, which is good, but she’s still in a critical window.  We still can’t be sure [if she will survive],” said Dr. Helen Chevalier.

“There’s no question that cruelty was involved here,” said Erie County SPCA Executive Director Barbara Carr.  “I think we can reasonably say that this is a case of starvation.”

They are now attempting to track down Metro’s owner to pursue animal cruelty and negligence charges.